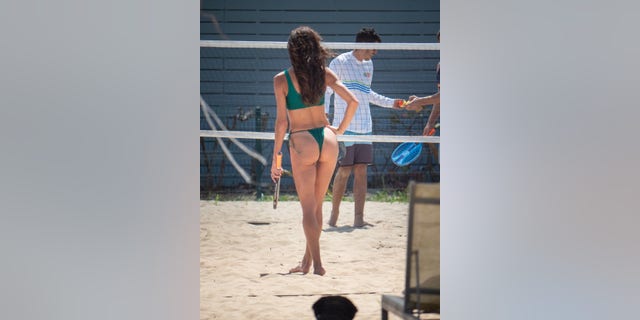 Gerard Butler and his longtime love Morgan Brown were seen catching some sun on the beaches of Puerto Rico on Sunday.

The “Law Abiding Citizen” actor, 51, was seen in a series of paparazzi snaps shirtless as Brown wore a green two-piece string bikini.

Other photos show the real estate developer playing beach tennis, while in another, Butler is seen rocking a tank top and holding his phone as Brown clad in a loose white outfit.

Butler and Brown were first linked during a Malibu outing in 2014, people magazine informed at that time.

According to the outlet, the couple dated each other for the next two years before separating. In 2016, a source close to Butler told the outlet that “they split a while back.”

The outlet noted that they rekindled their romance in 2017 when they were photographed together in Tulum, Mexico. But then three months later, Butler told the outlet that he was enjoying being single, adding that dating can be challenging with a high-profile career.

The couple reportedly split in August 2020 after dating for over six years.

Almost a year later, the revolving couple were seen kissing in May, and just a few months later, they were seen enjoying another beach vacation.

In July, Butler Filed a $10 million lawsuit against the producers of his 2013 film, “Olympus Has Fallen”, claiming that he owed him at least $10 million in backend compensation from the profits of the action film.

According to Variety, The lawsuit alleges that producers underestimated domestic and foreign receivables by tens of millions of dollars. The Scottish actor claimed in the lawsuit that he did not even report the $8 million that went to his own studio executives.