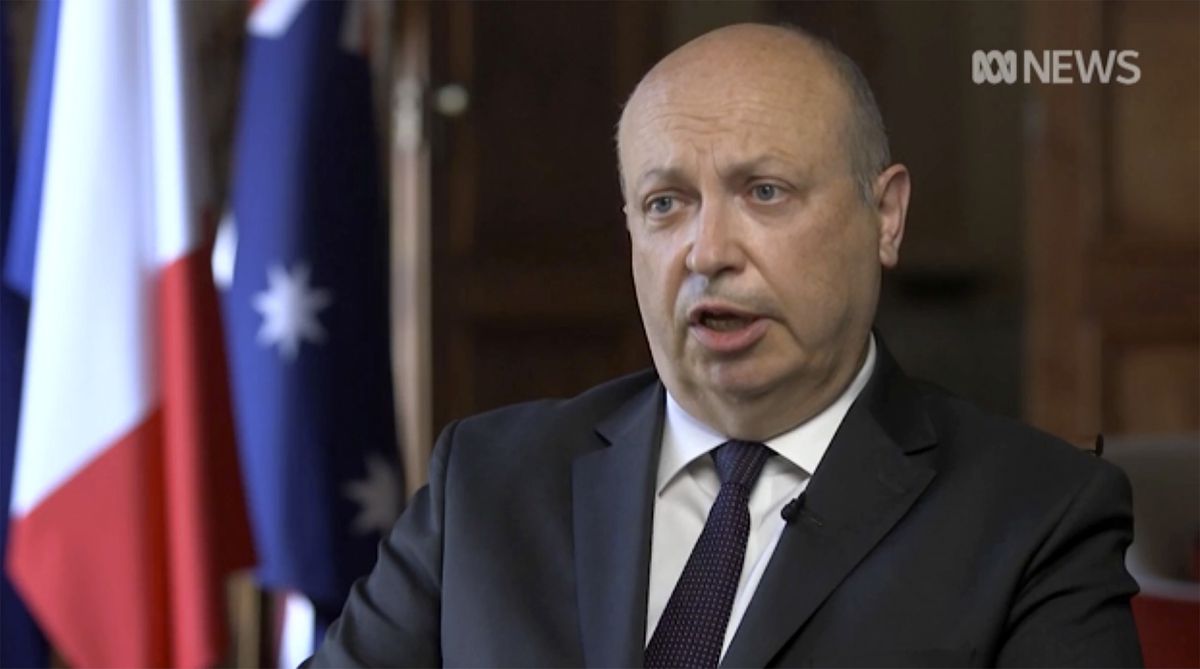 France’s foreign minister on Saturday denounced what has been called “duplication, scorn and lies” around the sudden break of France’s lucrative contract to build submarines for Australia in favor of a US deal and declared that Western allies There is a crisis.

A day after France recalled its ambassadors to the United States and Australia, what French Foreign Minister Jean-Yves Le Drian suggested was a backroom deal that betrayed France.

In an interview on France 2 television he said the recall of the French government and its ambassadors between Washington and Canberra “symbolizes the strength of the crisis today”. He said that this is the first time that France, America’s oldest ally, has recalled its ambassador to America.

US President Joe Biden’s announcement of a deal with the leaders of Australia and Britain for at least eight nuclear-powered submarines has angered France. France signed a contract in 2016 for a dozen conventional diesel-electric submarines and work to build them was already underway. The deal with the French-majority state-owned Naval Group was worth at least $66 billion.

As French officials seek to express their anger, diplomatic nuances have gone out the window.

Le Drian denied reports that advance consultations had been held with France before the announcement, saying “this is not true.”

Le Drian said, “The allies do not treat each other with such cruelty, so much unpredictability, as with a major partner like France … so there is really a crisis.”

“There are many reasons to question the strength of our alliance,” Le Drian said.

Previously, even the French ambassador to Australia had strayed from diplomatic language when it came to what he widely described in France as the “contract of the century”.

“It has been a very big mistake, handling the partnership very poorly,” French Ambassador Jean-Pierre Thébault said before leaving for France.

The arms agreement between France and Australia, signed in 2016, was supposed to be “based on trust, mutual understanding and honesty”, an angry Thebault said. “I want to be able to walk into a time machine and be in a position where we don’t end up in such an unreliable, clumsy, inadequate, un-Australian situation.”

He said he found out about the canceled contract in the Australian press.

Canada guarded by new security deal between US, Australia and Britain

Le Drian said in a written statement on Friday that the French decision to recall its ambassadors – at the request of President Emmanuel Macron – is “justified by the extraordinary seriousness of the announcements made by Australia and the United States”.

What French officials have called the complex, multi-stage contract was about more than just submarines. This was the basis of France’s vision of the important Indo-Pacific region, where France has a presence and China seeks to increase its influence.

The naval group said in a statement that the consequences of the cancellation would be analyzed with Australia “in the coming days”. It was noted that teams from France and Australia have been working on this project for the past five years.

Australian crews working with the Naval Group and their families have made their home in the Normandy port of Cherbourg. David Robin, a union official, told BFMTV that employees had been informed there might be an option to keep them running.

Australia’s Defense Minister Peter Dutton said on Sunday that Australia has been raising concerns with France about the order – valued at $40 billion in 2016 and costing much more today – for a few years.

“The suggestion is that the concerns were not flagged by the Australian government, just disregard what is on public record and certainly what they have said publicly,” Dutton told Sky News.

Australian Foreign Minister Maris Payne’s office had earlier issued a statement noting Canberra’s “sorry” over the diplomat’s recall and his aide taking back his representative.

“Australia understands France’s deep disappointment with our decision, which was taken in accordance with our clear and communicated national security interests,” the statement said. It added that Australia values ​​its relationship with France and looks forward to a future engagement together.

Payne and Defense Secretary Peter Dutton are currently in the United States for annual talks with their American counterparts and for the first time with Biden’s administration.

After the US deal became public this week, Australian Prime Minister Scott Morrison said he had told Macron in June that there were “very real issues about whether a conventional submarine capability” would be necessary for Australia’s strategic security needs in the Indo-Pacific. will address.

Morrison did not specifically mention China’s massive military build-up, which has gained momentum in recent years.

Morrison was in Paris on his way home from the Group of Seven summit in Britain, where he held talks with soon-to-be coalition partners Biden and British Prime Minister Boris Johnson. Thebault said he was also in the meeting with Macron and Morrison.

Morrison noted that “there were changes in the regional situation,” but gave no indication that Australia was considering switching to nuclear propulsion, Thebault said.

“Everything should have been done with complete transparency between the two partners,” he said.

“The impact on our relations with France is a matter of concern, especially as a country with significant interests in our region,” Dreyfus said. “The French were blinded by this decision and Mr. Morrison should have done more to protect the relationship.”