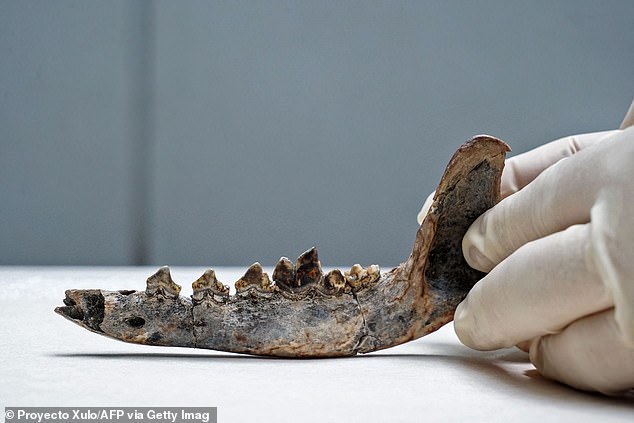 The bone was originally classified as belonging to an ancient coyote, but the animal did not arrive in the area until the 20th century and the teeth appear to be more like a dog than a coyote.

A team of Latin American scientists re-analyzed artifacts discovered initially in the 1990s, which were found with a giant horse and mastodon—meaning humans were living nearby.

Costa Rican researcher Guillermo Vargas told France Media Agency (AFP): ‘We thought it was very strange to have a coyote in the Pleistocene’ [Era]That is, 12,000 years ago.

‘When we started looking at the bone fragments, we started seeing signs that could be from a dog.’

A fossilized dog jaw bone with about eight jagged teeth suggests that ancient civilizations in Central America domesticated the animal about 12,000 years ago.

During the analysis, Vargas and his colleagues took a closer look at the teeth still attached to the ancient bone and found that they were not as sharp as those found in coyotes.

‘The dog eats leftovers from human food. Its teeth are not so determinant in its existence,’ Vargas said.

‘It hunts large prey with its human companions. This sample shows that difference.’

Along with teeth, the team notes that the appearance of dogs throughout history has always accompanied humans.

The bone was originally classified as belonging to an ancient coyote, but researchers recall that the animal did not arrive in the area until the 20th century and the teeth are not as sharp as those found in coyotes.

The first domesticated dogs arrived in North America about 15,000 years ago, but they did so with human owners who crossed the Bering Strait from Asia.

“There have never been dogs without people,” Valadez told AFP by telephone.

‘The presence of humans during the Pleistocene has been attested in Mexico, Chile and Patagonia, but never in Central America until now.’

The discovery is even older than a 10,150-year-old dog in Alaska, which means the jaw may be ‘the oldest dog in America,’ according to Vargas.

Oxford University has offered to conduct DNA and carbon dating tests on the sample to find more genetic information about the animal and its age.

The fossil is currently kept in the National Museum of Costa Rica, but the specimen cannot be re-identified as a dog without verification by a specialist journal.

‘This dog discovery will be the first time humans in Costa Rica during a much earlier period,’ Vargas said.

The first domesticated dogs arrived in North America about 15,000 years ago, but they did so with human owners who trekked across the Bering Strait from Asia (Stock).

‘It would show us that there were societies that could keep dogs, that had extra food, that had dogs by will and that it was not war dogs that could cause harm.’

A separate study released in January revealed the time when dogs first came to America.

A team of international researchers examined a trove of archaeological and genetic records of ancient people and dogs and found that the two traveled west across Eurasia and then east to the Americas.

These findings also suggest that dogs were domesticated in Siberia at least 23,000 years ago and may be a result of the region’s harsh climatic conditions.

Co-author Professor Gregor Larsen from Oxford University said Statement: ‘Researchers have previously suggested that dogs were domesticated in Eurasia, from Europe to China and many places in between.’

‘The combined evidence from ancient humans and dogs is helping to refine our understanding of the deep history of dogs, and now points to Siberia and Northeast Asia as a likely region where dogs began to be domesticated. Was.’

Records showed that the first people to arrive in the Americas came about 15,000 years ago—and they brought their own domesticated dogs.

The data suggests that it was a group called the North Siberians who may have been the first to domesticate wolves by feeding them leftovers.

Genetic analysis of the world’s oldest known dog remains has shown that dogs were domesticated in a single event by humans living in Eurasia about 20,000 to 40,000 years ago.

Dr Krishna Veeramah, assistant professor in evolution at Stony Brook University, told MailOnline: ‘The process of domesticating a dog must have been a very complex process, involving several generations where the signature dog traits evolved gradually.

‘The current hypothesis is that the domestication of dogs originated passively, with wolf populations somewhere in the world feeding on waste created by humans living on the outskirts of hunter-gatherer camps.

‘Wolves that were chiseled and less aggressive would have been more successful in this, and while humans did not initially benefit from the process, over time they may have developed some sort of symbiosis [mutually beneficial] Relationships with these animals, eventually developing into the dogs we see today.’