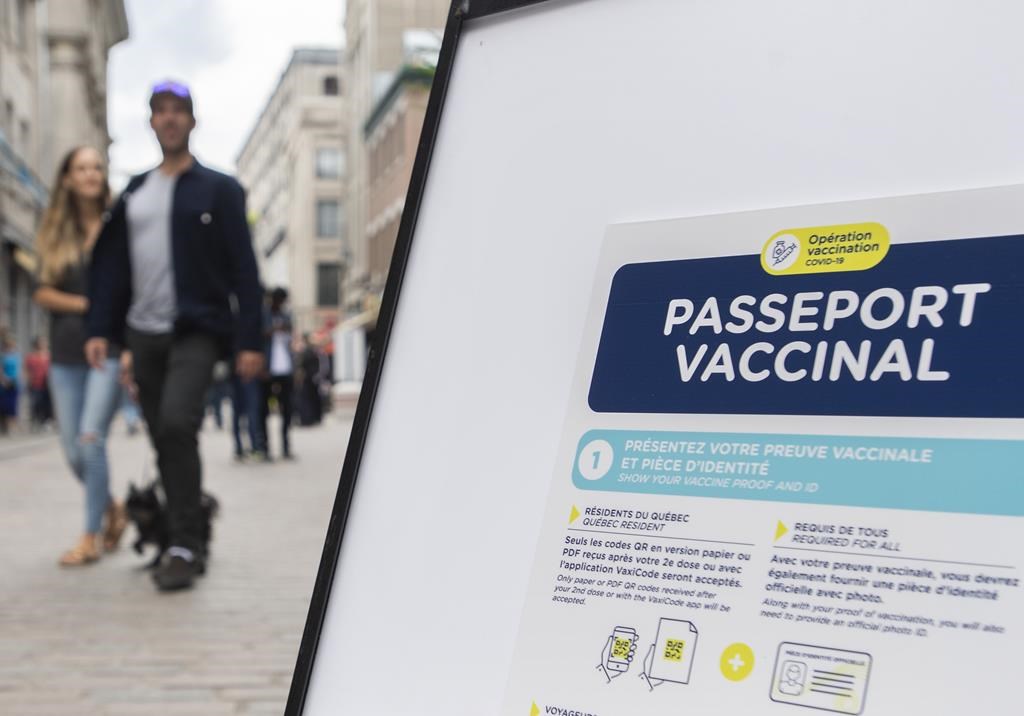 Ontario police forces and other enforcement bodies are reporting incidents in the early days of proof of the province’s COVID-19 vaccination policy, as some businesses have publicly pledged to ignore the rules.

Most incidents reported to police since Wednesday, when the new vaccine certificate system came into force, involved people who refused to show proof of vaccination.

The police force provided minimal details on what happened in the conversation, but noted customers entering without showing evidence of vaccinations left before police arrived in two reported cases. In the other five, they left “without incident” after officers arrived at the site.

Guelph police said officers responded to a report involving a man at a restaurant who “was refusing to show proof of vaccination and refusing to leave.”

The police force said the man was gone by the time officers arrived, but noted that in future, those who don’t follow the rules could be removed under the Trespassing of Property Act.

Toronto Police said it had received “several” calls related to the policy, which it directed to 311, “with no significant problems to report.”

Other police forces surveyed by The Canadian Press said they were not aware of any stamps issued on the first day of the vaccine certificate policy.

Police forces have broadly stated that they will respond to situations where public safety is threatened, but will not check individual compliance.

Fines for businesses and patrons who violate the rules are on the table, but officials have said initial enforcement will focus on education about the changes.

Compliance checks are to be carried out by provincial and municipal inspectors. Till Thursday, some incidents had been reported there as well.

A spokesman for the City of Toronto said no tickets had been issued by by-law officials.

RELATED: Queens Park to require proof of vaccination for entry from October 4

Public health units also said that issues requiring enforcement have not yet emerged.

A spokesman for Huron Perth Public Health said there was no information to share so early in the implementation of the policy. Health units covering Windsor-Essex County, the Niagara Region and Brent County said they were not aware of any enforcement as of Thursday, with Brent County recently seeing a boom in vaccination bookings.

The North Bay Parry Sound District Health Unit said it had responded to “very few complaints” about the vaccine certificate program, with no fines issued as of Thursday afternoon. It said in a statement that it has received several requests from businesses to ensure they are complying with the programme.

Despite loose enforcement in the policy’s early days, many business owners in the province have publicly announced that they do not intend to ask for proof of vaccination, or will only serve take-out to avoid asking.

Those who oppose the policy have connected on social media to exchange the names of businesses that they claim are not following it.

A Facebook group called Ontario Business Against Health Pass had amassed more than 136,000 members as of Friday, though it’s not clear how many of them are business owners. It described itself as a place for people to “compile a list of occupations that believe a health passport is unconstitutional in Ontario.”

A similar Facebook group focused on businesses in Windsor, Ont., had attracted more than 12,000 members as of Friday. The discussion posts highlight businesses that claim they are not implementing the vaccine policy, and others request recommendations for preserving new locations after being away from their local locations.

Group administrator Crystal Bernauer claimed that the group consisted of hundreds of businesses.

“Unfortunately, we think the government has put us in a position where we have to discriminate and divide each other,” Bernauer, who said she owns a cleaning company, said in an interview.

A gym in Mississauga, Ont., which opened during the last pandemic shutdown, has also announced that it will not investigate the status of vaccinations.

Another website titled “NoPass List” names businesses across Canada “that do not discriminate on the basis of medical choice.”

Premier Doug Ford has repeatedly said he was reluctant to implement the policy, but decided to do so temporarily to avoid restarting lockdown measures.