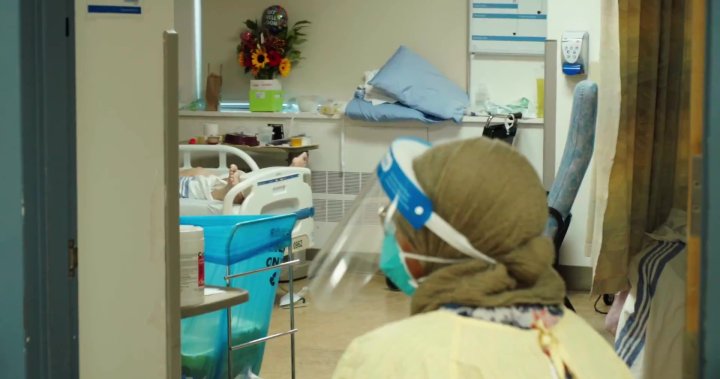 The Canadian Medical Association says the COVID-19 situation in Alberta and Saskatchewan is at a point where “extraordinary measures” are needed.

one in news released on Wednesday morningDr. Katherine Smart, the group’s president, said the spikes in both provinces are “heartbreaking” and we are “now in a position where all hands are on deck to address the crisis situation.”

“Any and all measures available to curb mortality must be implemented, support workers and begin addressing the consequences for patients whose care is now indefinitely,” Smart said.

“This is a time for courageous action, and a time for politics to go out of the way of necessary cooperation.”

The call to action aimed at provincial and federal governments increased vaccination through compulsory vaccination in health care settings, implementing “firebreaker” or “circuit breaker” style shutdowns, increasing mobility of health workers between provinces and patients. including supporting the safe transportation of In other jurisdictions with greater intensive care capacity.

Smart also blamed the early relaxation of COVID-19 protective measures as the reason for the provinces’ “collapse of health care systems”.

Now is the time for daring action.https://t.co/qAqAmszeHo

There were 1,100 Albertans in hospital with COVID-19 on Tuesday, of whom 263 were being treated in the ICU; The hospital in Saskatchewan had 311 patients with COVID-19, 65 of whom were in the ICU.

Both provinces have full vaccination rates below the rest of Canada, with Alberta and Saskatchewan having fully vaccinated 73 percent of their eligible populations.

Prime Minister Justin Trudeau said on Tuesday that the federal government was ready to help the provinces.

“I have asked my office to reach out directly to Premier’s officials and I hope to speak with Premier Kenny tomorrow – and Premier Mo too soon – to reaffirm our commitment to supporting the people of Alberta and Saskatchewan.” What we are facing right now is an extraordinarily difficult and heartbreaking situation,” he said.

During a COVID-19 update on Tuesday, Alberta Premier Jason Kenney was asked if he had declined federal help offered last week.

“We haven’t (asked for help) at this point, and that doesn’t mean we won’t discuss it this week or move on if we haven’t been able to get into these numbers and at their peak. hospitalization numbers,” he said on the show.

Smart said there is a “duty and commitment” to helping Canadians.

“Because at the end of the day, it is the people of Alberta and Saskatchewan – patients, families, communities and health workers – who are affected by this,” she said.

“It is time for governments, businesses and citizens to step up and do the right thing. Extraordinary times demand extraordinary measures – and that time is now.

-With files from Granthshala News and The Canadian Press.