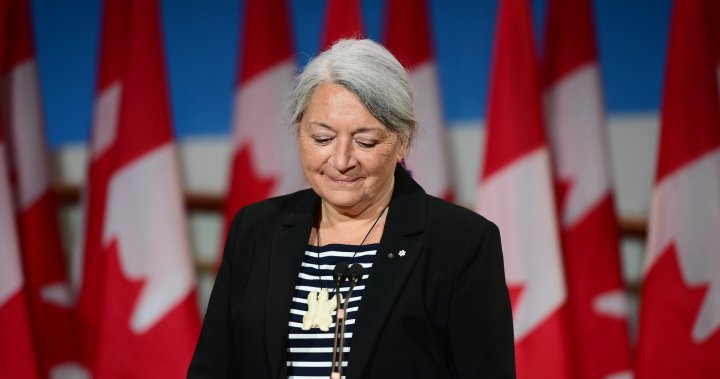 On the eve of Canada’s first National Day of Truth and Reconciliation, Governor General Mary May Simon had some very personal thoughts on Wednesday.

As the daughter of a white father and Inuk mother, May Simon said in a statement that she was not allowed to attend a residential school.

She was left behind and studied at home, while other children were expelled from their homes, separated from their families and sent to residential schools, where they were forced to speak an indigenous language or respect their culture. was not allowed.

May Simon, who was born in an Inuit village in northern Quebec, remembers families where the absence of children was an “obvious void”.

“I was a stand-in, a well-loved option for mothers and fathers who missed their children dearly,” she said.

“We all felt it. Sad to lose a part of our community.”

On the eve of the first National Day for Truth and Reconciliation, #GGMeSimon Calls upon us to “stand shoulder to shoulder with grace and humility and work together to create a better future for all”. https://t.co/hMJhSi7By1#NDTR pic.twitter.com/3jSRvKG1qN

Several residential school survivors told their stories at a ceremony on Parliament Hill Wednesday night ahead of Thursday’s inaugural Truth and Reconciliation Day.

The outdoor ceremony took place near the Centennial Flame, where pairs of stuffed toys and children’s shoes have been left in honor of the children who have never returned from residential schools.

The Peace Tower was illuminated orange and the Survivor Flag was flown at half-mast.

Celine Thusky talks about being separated from her family at the age of seven, seeing fellow students physically and sexually abused at school, and having no one to comfort her.

Inuk’s elder Levinia Brown said, “As kids attending residential schools, not many people heard that I love you and we were made to feel like we weren’t good enough.” He watched some of his fellow students die “and we were left to process our grief alone as children.”

Prime Minister Justin Trudeau praised the courage of the survivors and acknowledged that it may not be easy for them to tell their stories.

Canada is seen as a peace-loving place that respects people’s rights, but it is also a country that has made “big and terrible mistakes”, Trudeau said.

He told the small crowd that had gathered for the ceremony, “Everyone is good at telling how great we are, how heroic we were in this moment or brave leaders in other moments.”

“It is hard to contemplate on the truth of mistakes, of the evil that we did in the past, but this day, this day of truth and reconciliation, should be so.”

Reconciliation, Trudeau said, means not just looking back and understanding the mistakes it has made in the past, but acknowledging that Canada still lives with a legacy of those mistakes in the form of injustice, inequality and systemic racism. .

He said Truth and Reconciliation Day is not just for indigenous people.

“And you all, to go about your daily lives, take a moment to listen to the stories of a living elder, an indigenous elder who shares his perspective, his experiences in this country,” he said.

“And know that that story, their story, is your story too. And there can be no truth until we understand as a country that each of us has a story for our stories, There can be no reconciliation.

Truth and Reconciliation Day aims to honor the lost children and survivors of residential schools, 140 of which operated nationwide from 1831 to 1998.

Some 150,000 Indigenous children were forced to attend church-run schools, where many faced physical and sexual abuse, malnutrition and neglect. More than 4,000 people are believed to have died.

“The legacy of colonization has had devastating effects for indigenous peoples, including the loss of language, culture and heritage. This pain has been felt from generation to generation, and it continues to this day,” May Simon said in her statement.

“These are uncomfortable truths, and often hard to accept. But the truth also unites us as a nation, bringing us together to let go of anger and despair, and instead seek justice, harmony, and trust. Hugs.”

The bill was passed soon after the tragic discovery of what were believed to be the remains of 215 Indigenous children in unmarked graves at a former residential school in Kamloops, BC.

-With files from Hina Alam

Kyrsten Sinema Is at the Center of It All. Some Arizonans Wish She Weren’t.