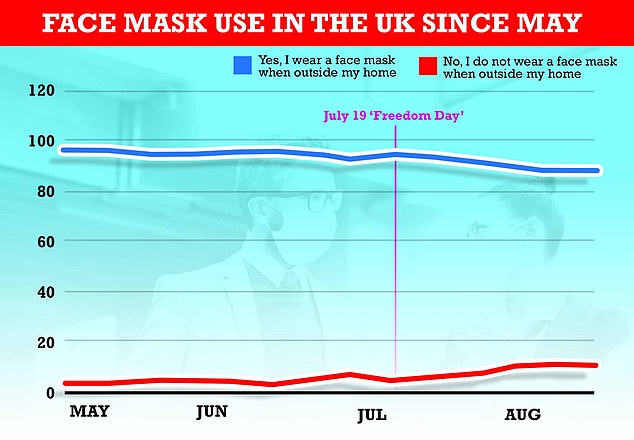 The Office for National Statistics survey found that 89 percent of people wore coverings outside their homes for the week ending September 5. For comparison, there was an uptick in the 98 percent zone at the beginning of May, when the second wave was receding.

This is similar to the roughly 4.3 million people who have turned their backs on masks, the figures show.

Face masks help prevent the spread of the coronavirus by capturing the tiny droplets left by infected people. But the science on how well they work has been poor, although experts insist that the benefits of wearing the coverings are clear.

Boris Johnson rescinded the rules for wearing masks indoors in England on ‘Independence Day’ on 19 July, despite top No10 scientists calling on people to keep using them.

But unveiling his winter plan this week, the prime minister warned they could still be brought back if the virus spirals out of control again.

About 89 percent of Britons said they wore a face mask outside the home at the end of August. For comparison, in May it was 98 percent

No need to wear face masks in Commons as MPs are not ‘strangers’, says Sajid Javid

Sajid Javid said today that Tory MPs are not required to wear face masks in the House of Commons because they are not ‘strangers’.

The health secretary defended cabinet ministers for failing to wear a face covering at a meeting yesterday morning.

He said the meeting, in which ministers sat side by side around a traditional cabinet table, was ‘fully consistent’ with the government’s guidance on masks.

Mr Javid said people should consider wearing masks in crowded places when they are with strangers, when with people they don’t normally spend time with.

Opposition lawmakers have accused Tory lawmakers of ‘interfering’ with the health of other lawmakers after they stopped wearing masks in the Commons.

The ONS Coronavirus and Social Impact Survey highlighted a decline in the use of face masks across the country.

The survey of nearly 3,400 adults asked people whether they had used a face covering outside their home in the past seven days.

England does not currently require them to be used but still requires them on transport to London.

Scotland still has rules requiring masks to be worn when in shops, on public transport, and when sitting in restaurants and pubs.

In Wales, coverings are still mandatory on public transport and indoors in public areas.

And in Northern Ireland they are still required to be worn in shops and hospitality venues.

Despite their use being mandated or encouraged in almost every country in the world, during pandemics there has been a heated scientific debate about how well they protect against transmission.

Lab tests and observational studies have shown that masks can prevent infected people from releasing up to 80 percent of the virus into the air and protect wearers from inhaling up to 50 percent of the particles.

Experts previously told MailOnline that the vaccines were working so well that there was no reason to wear a face mask.

But he said coverings could still be beneficial in tubes such as hospitals, care homes and crowded places with poor ventilation.

He said that high grade FFP3 masks would be the best option as compared to homemade cloth masks.

It comes as Health Secretary Sajid Javid said yesterday that Mr Johnson and his cabinet were not required to wear masks in close quarters because they were not ‘strangers’.

Asked about a photo of a cabinet meeting where no one was wearing a face mask, Mr Javid insisted to Sky News yesterday: ‘This is completely in line with what the PM said yesterday and what I said yesterday .

Government guidance reads: ‘We expect and recommend that members of the public continue to wear face coverings in crowded and enclosed spaces where you come into contact with people you would not normally meet.’