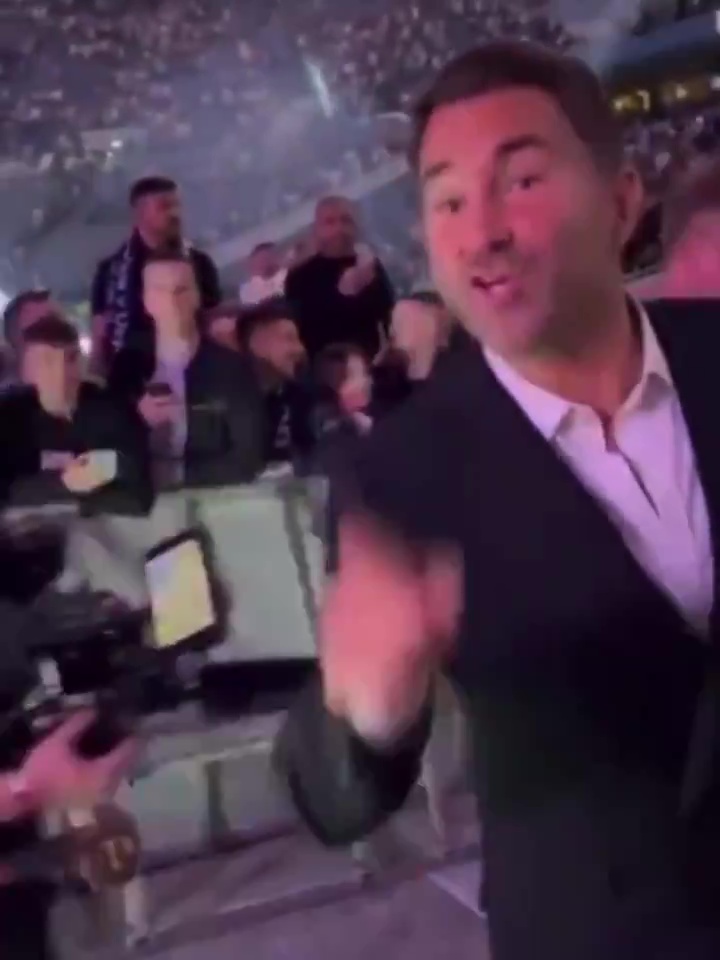 EDDIE HEARN has admitted that he regrets his blazing row with a fan following Anthony Joshua’s loss at the hands of Alexander Usyk and suggested emotions were just running high.

The matchroom promoter, 42, was on his way back to the dressing room at Tottenham Hotspur Stadium after watching AJ lose by unanimous decision.

As the rocky-faced Hearn exits the arena, a fan can be heard shouting ‘p***y’ at him.

Hearn quickly turned to face the crowd before launching a verbal attack of his own.

The head of the matchstick angrily demanded ‘What did you say?’ four times.

But Hearn has expressed regret for his actions, admitting that he was so agitated that it would have ‘taken 40 people’.

Hearn told IFL TV: “I shouldn’t have done that, but we spend our lives online listening to people who abuse you.

“It’s not because I’m a tough guy. I must have had about 40 guys at the time!

“But yeah, I shouldn’t have done that.”

After the fight, Hearn confirmed that Joshua would immediately trigger his rematch clause with Usyak.

But the promoter has urged AJ to change his style in the second fight with the Ukrainian, after saying that the attempt to outbox Usyak was a ‘terrible idea’.

Hearn claimed: “I don’t know if it was almost a rebellious thing where it’s like, ‘No, I’m going to go out there and outbox him’.

“So maybe he wanted to be a little more aggressive, wasn’t able to because of talent at specific times.

“I don’t want to just say, ‘Bad game plan, poor performance’. You have to give incredible credit to Usyk, he’s brilliant.”