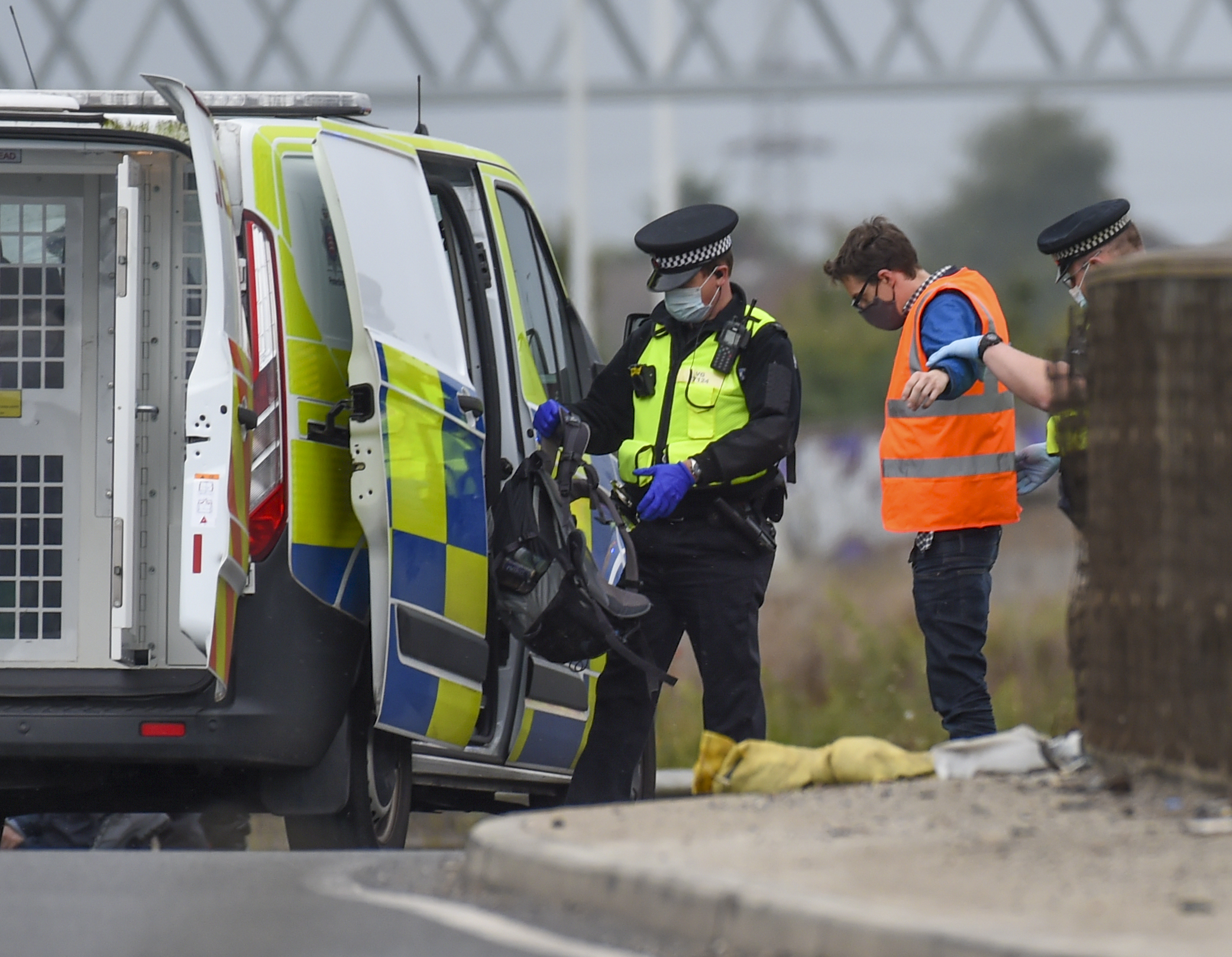 ECO-WARRIORS hit the M25 for the ninth time this morning in just a fortnight.

Shameless blockheads of Insulate Britain staged a sit-in at Junction 30 near Thurrock in Essex today as they defy a High Court order.

And while police were on the scene within minutes, witnesses say they initially struggled to arrest the preachers—as they stuck their hands to the road surface.

So far nine people have been arrested.

The video shows the moment they came out in front of the giant HGV on the roundabout.

The leader blows a whistle and holds out his hand before the group marches into the street.

The furious lorry drivers immediately start blowing the horns as soon as the preacher sits.

Essex Police wrote on Twitter: “We were called to reports of road blockades by people and officers responded within minutes.

“We are currently working to resolve the situation as quickly and safely as possible. We know this will be frustrating for people using the road but we appreciate your patience and understanding.”

Insulate Britain say they are “accelerating this week” as there has been “no meaningful response from the government”.

And when asked how they would respond to the anger of UK drivers, a spokesman replied: “We don’t concern ourselves with online trolls.”

Just yesterday, protesters targeted the Swanley Interchange at the junction three times in Kent – blocking the road at 7.40 a.m. and again at 1 p.m.

The group has vowed to continue its tiresome campaign, which is causing traffic problems for hard-working Britons, until their demands are met.

He faced prison for his actions after Transportation Secretary Grant Shapps announced a second injunction against him by the government last week.

But in a letter to Priti Patel, he warned: “You can impose as many injunctions on us as you want, but we’re not going anywhere.

“You can raid our savings. You can confiscate our property. You can deprive us of our freedom and put us behind bars.

“But shooting the messenger can never destroy the message: that this country is going to hell unless you take emergency action to stop putting carbon in the air.”

And hypocritical spokesman Liam Norton – who became a national laughing stock last week after attacking Good Morning Britain – vowed that he and his partner Green Loon are “not going anywhere”.

Susannah Reid was reprimanded for “protecting” her as she awkwardly tried to discuss the particular revelation that her own home remained untouched.

Meanwhile, just last week, in the midst of the country’s HGV driver shortage, protesters shook hands with lorries at the Port of Dover.

Mr Shapps warned today: “The reckless protesters who repeatedly put their lives at risk on the M25 have already knocked on their doors.

“We are serving the papers and those who continue these foolish, dangerous and counterproductive demonstrations will be caught and face unlimited fines or jail.”

Campaigners are calling on the British government to ensure that all homes are optimally insulated.

They claim that every year 8,500 people die unnecessarily due to cold homes in Britain.

Tory MP Lee Anderson, who represents Ashfield in Nottinghamshire, said officials needed to “catch up and go to court so that the full force of the law can be delivered”.

“These hypocritical activists are being allowed to cause havoc – and will not be allowed in any other country in Europe,” he said.

And Hugh Bladen of the Alliance of British Drivers told daily Mail: “If we’re not going to chase people who break it, there’s no point in having this injunction; that’s the rule of law.

“They have prohibitory orders so they should make good use of it and get these people off the streets. The protesters are making fun of the justice system of this country.”

There have been scenes of furious motorists responding to every single blockade of the group.

Three days earlier during the blockade at Junction 14 near Heathrow, a woman got out of her car and told preachers: “I have to feed my kids now.

“If you did, you wouldn’t be stopping normal people like me from trying to work to feed my kids. You’re ridiculous.”

“Peaceful protest is the cornerstone of our democracy and people will always have room to raise their voices, but it is not on busy roads or important ports that lives are at risk,” he said.

“The demonstrations we have seen in the past few weeks have wreaked havoc on our streets, disrupting thousands of people and putting lives at risk, and we are taking action to prevent this type of guerrilla strategy in the future. “

sorry for the drivers

Eco-morons are again blocking the M25

September 20 – 29 demonstrators at two locations on the M25 as well as the A1. has been arrested after blocking

September 21 – Protesters rush into traffic to block the main carriageway near Junction 10. Some 38 arrests are made. An injunction has been made against further protests on the M25.

September 22 – Protesters blocked the road outside the home office. no arrest

September 24 39 protesters have been arrested by blocking the road at three places in Dover. All have been released after investigation. National highways covering Dover receive second injunction

September 27 53 protesters have been arrested for jamming the slip road at junction 14 of M25. All have been released after investigation.