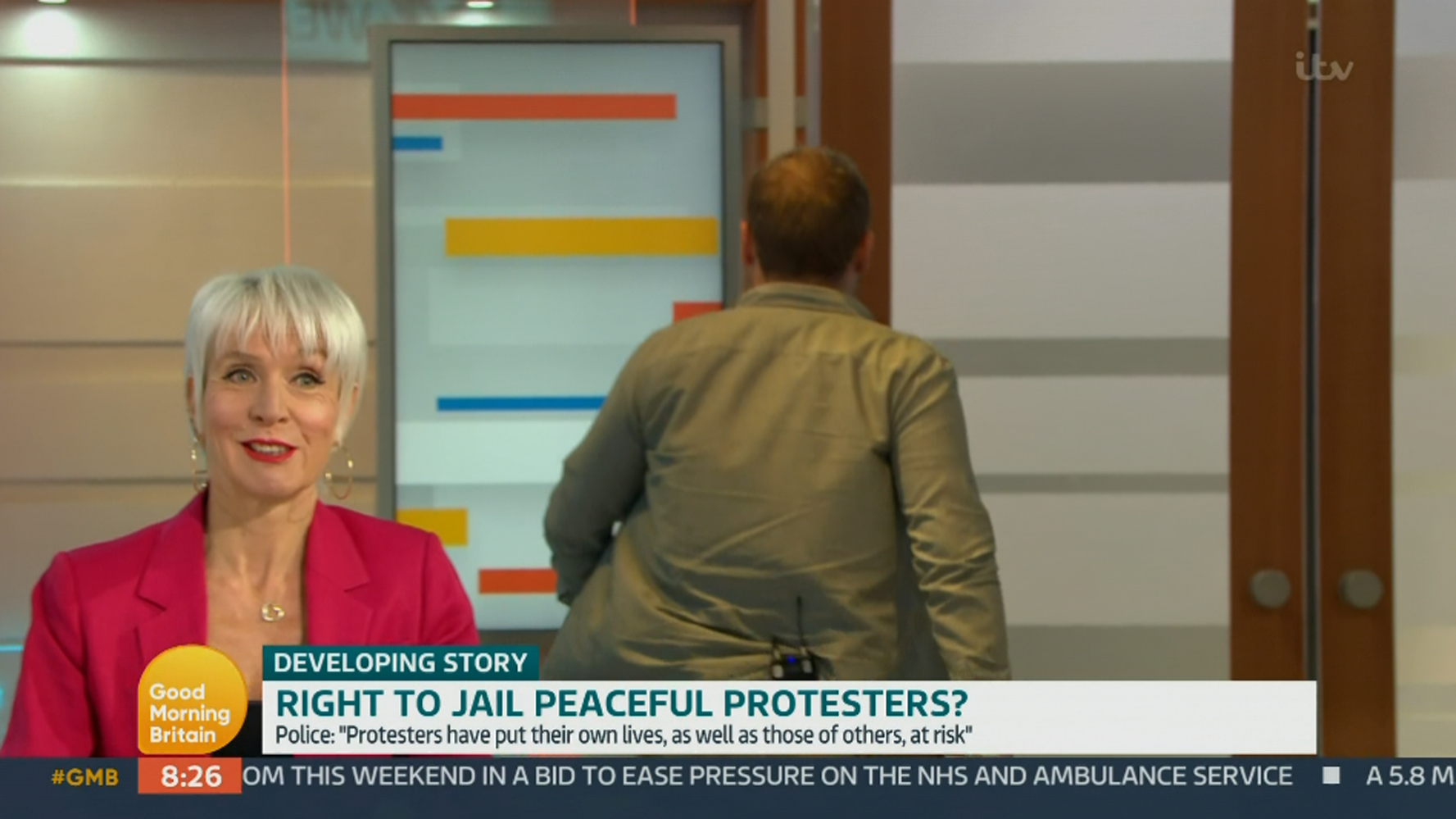 An Insulate Britain activist walks out of the GMB studio this morning after a heated argument with presenters over the M25 protest.

Eco-warrior Liam Norton with an attitude was hostile to hosts Susannah Reid and Richard Madley and declined to answer questions.

Susanna warns him: “Don’t patronize me” during the heated exchange—as she awkwardly tries to discuss Sunday’s special revelation that her own home remains untouched.

He was at the show for the second time in two weeks to defend his group’s continued disruption of traffic on the M25 by setting up human barriers.

Things got off to a cold start, with Susanna questioning Norton about the group’s ways.

He said: “If you understand it [climate change] you can begin to understand [protests] little more.”

Susanna retorted: “Liam, just try not to be too patronizing when you’re talking to me, okay. I get it.”

He replied: “It’s not about conservation, it’s the truth.”

Standing firmly, he said: “No, it is. It is patronizing.”

Richard and Susannah questioned electricians on Sunday about a special revelation about insulation in their own home.

We previously revealed that Electrician Norton’s property uses gas central heating and is single-glazed, with no insulation in the cavity walls.

A surprised Susannah asked: “So you’re saying you’re going to risk your life to Insulate Britain… but you’re not going to insulate your house?

Property in south west London is owned by a housing association, but residents can claim a grant for improvements.

Norton, with a rocky face, slammed the GMB hosts for “minimizing the discussion”, while journalist Don Neesom encouraged him to answer questions.

And Richard once again branded the group’s fascists for their controversial ways.

He also asked Norton how he fell asleep at night after a woman was paralyzed after being in a traffic jam for six hours following a stroke.

“We are demanding that the government make a meaningful statement to save the future.”

He then compared the unbelievable reason to the racism of Winston Churchill and the stance of Adolf Hitler – to his distrust of Richard Madley.

When he got up and left the studio, Richard laughed and made a physical statement of his own.

His on-air blast came as national highways were handed an injunction against motorway protesters by a judge – coming into force later today.

He told lawmakers this morning: “We don’t think it’s acceptable to go and stand on the street – it’s bloody dangerous. It’s obviously inconvenient.

“I share the annoyance and anger of motorists and everyone else and I hope that the court action I have prompted on National Highways is of great help.”

He and Home Secretary Priti Patel after being “furious” over the group’s “guerrilla tactics”.

Just yesterday morning, the protest group took their reckless ways to a peg, following oncoming traffic in both directions of the M25 carriageway.

But between junctions 9 and 10 near Cobham, Surrey was swiftly dealt with by the waiting police – starting from 8.10 a.m. to 9 a.m.

Norton, 36, told Good Morning Britain in his first appearance: “What we do over the next three to four years will determine the future of humanity.”

He was challenged by host Richard, who said he could keep a child on his way to cancer treatment.

Norton said in a statement: “This is a fine example of one of Britain’s leaky homes and why we need to keep the government hiring.”

“we hate doing it”

Activists blocked a carriageway of the major road last week, but this is the first time they have managed to block both.

The group’s Zoe Cohen told LBC: “It’s not about justifying it. What we do know is that our government is failing to protect British families.

“Thousands will die of fuel poverty this winter. Millions of families will struggle.

“We hate doing it, we hate doing it – please, please – would you please ask the government to write an appropriate statement and get us off the road. We don’t want to do that.”

“If the government meets our demands to save and rebuild social housing and the rest of the homes in the UK, it will save thousands of lives.”