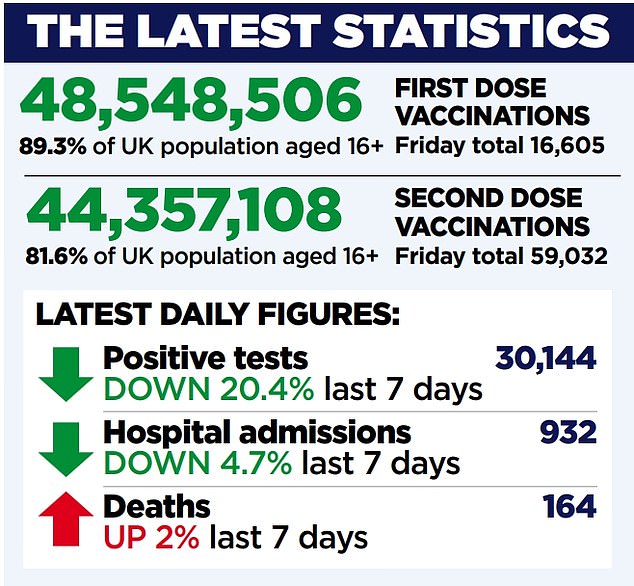 Downing Street has been warned by its scientific advisors that the delta variant of the Covid will ‘hunt down’ those who are left without vaccination.

No 10 is told that the more permeable version has ‘such a nature’ that it is ‘almost inevitable’ that it will eventually infect anyone who hasn’t got both jabs.

The development comes as former Health Secretary Matt Hancock today makes his first intervention in the media since resigning from cabinet earlier this year.

Writing in Today’s Mail on Sunday, Mr Hancock lauded the fact that more than four out of five over-16s now have both doses of the vaccine, but sharply criticized anti-vax campaigners.

He writes, ‘Incredibly, there is still a persistent but thankfully small and shrinking group of people determined to try to halt this progress. ‘In all my time in public life, I’ve never met a group that was anti-vax.’

As it was revealed last night that two professional dancers have refused to comment on BBC’s Strictly Come Dancing, they write: ‘I appreciate those who go ahead to have their fun in a very public way have come. Whether Sir Elton John, David Walliams or Gareth Southgate, many celebrities have stood up to help our national effort … for every hesitation that has been taken from the lies of the anti-Semitism, persuaded by the far more obvious Objective facts published by doctors.’

Health Department officials said yesterday they expect the ratio of more than 16 to 90 percent for at least one dose of the vaccine by the end of the week. It is completely closed at 89.3 percent (48.5 million) at 81.6 percent (44.4 million).

A government source speaking of the delta – or Indian – type of risk, said: ‘The nature of this virus is such that if it continues to evolve and adapt in this way, it is almost inevitable that someone who hasn’t If Jobs eventually got infected.’

Despite objections from some scientists, vaccination for children aged 12 to 15 is set to start from Wednesday.

Professor Adam Finn, a member of the government’s Joint Committee on Immunization and Immunization, said scientists do not have the ‘luxury’ of time to research potential risks.