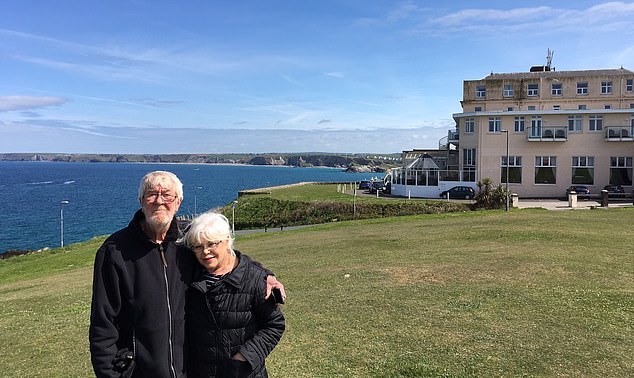 Health chiefs have ordered a review of COVID regulations in a move that could pave the way for face-to-face GP appointments.

This comes less than a week after the Granthshala launched a campaign to ensure better access to family doctors.

GPs claim that the ongoing two-metre social distancing rule prevents them from seeing more patients in person because waiting rooms are too small to accommodate them.

NHS England insists the requirement, which is specific to health care, should not prevent GPs from seeing people face-to-face.

But the number of consultations in surgery has dropped to just 57 percent this July from 80 percent before the pandemic.

The huge increase in telephone and video consultations has raised fears that serious diseases such as cancer are being missed.

The prime minister himself has warned, emphasizing the importance of face-to-face appointments: ‘I am quite sure that until we can say that there will be unhappy people whose symptoms are not picked up and who will suffer the consequences.’

The Department of Health last night launched a review of infection prevention and control (IPC) measures across the NHS, which could reduce – or eliminate – the two-metre limit.

June Walker, 67, first called her family doctor last November about her persistent headache and shoulder pain. However, no GP was ready to see him in person, he was only referred for physiotherapy

Months of pain because I couldn’t see the doctor

A retired estate agent endured eight months of excruciating headaches because his GP would not see him face-to-face and would not take his blood pressure.

However, no GP was ready to see him in person, he was only referred for physiotherapy.

But the headache was not improving and – despite repeated surgeries – she was unable to see her GP.

His blood pressure was finally taken in June when he was hospitalized as an emergency for another problem.

Surgeons wanted to do a colonoscopy, but declined after realizing she had low blood pressure.

They wrote to her GP and she was prescribed blood pressure pills, which cured the headache. Last night she said: ‘I had a terrible headache every day for eight months that was completely unnecessary.

‘Taking your blood pressure and listening to your chest is the first thing the GP would do when you went to see them.

‘If I had been able to see my doctor in person in November I could have saved myself so much pain.

‘Some things can’t be diagnosed over the phone. I took 120mg of codeine every day and nothing happened – it’s like a miracle.’

She said she was getting ready for a major operation in the hospital for a different medical issue ‘when they took my blood pressure and refused to do it.

‘The doctor said he was worried I would have a stroke on the table.

‘That’s when it became an emergency, but I was going around with it for months, it was scary.’

Mrs Walker, from Aylesbury, Buckinghamshire, said: ‘I feel very disappointed with my GP practice. Had I seen a GP and had my blood pressure taken, it would have relieved me of eight months of terrible pain and would have avoided any potentially life-threatening illness.’

Mrs Walker, who is married to the production manager, Noel, 71, and has seven grandchildren, said she ‘absolutely’ supported the Mail’s campaign for GPs to see patients face-to-face.

Mrs. Walker said, “I am very pleased that the Mail has taken up this issue.”

‘It is appalling that GPs are holding themselves on a pedestal and are unwilling to treat their patients.’

A source said: ‘The review will examine which rules need to be implemented and which can now be safely removed or amended. It is too early to know what the outcome will be, but it will consider the constraints that GPs have used to avoid seeing patients face-to-face.’

Dr Lisa Cameron of the SNP, chair of the all-party health group in Westminster, said yesterday: ‘It is good news that the government is finally taking action. Now is the time to review these guidelines as most people are now double-jaded, which means they are much less likely to get sick if they catch COVID.

“I am really concerned that people are finding it difficult to get appointments and the situation is dire now.

‘We need to start seeing more people meet their GPs face to face. If GPs can’t fit too many people in their waiting rooms, they should better make appointments.’

NHS England introduced extensive remote consultations in March last year to control the spread of the coronavirus at the start of the pandemic.

It wrote in for surgery this May, telling him that doing so could keep the virtual appointment going.

However, it clarified that they should have an option ‘with a clear offer of appointments in person’.

It said: ‘This option should seek patients’ input and practices should respect preferences for face-to-face care unless there are good clinical reasons to the contrary – for example, COVID Presence of symptoms.’

Doctors have pointed to separate guidelines on infection control produced by the NHS and Public Health England, which state that practices should enforce social distancing of two meters and the use of face masks.