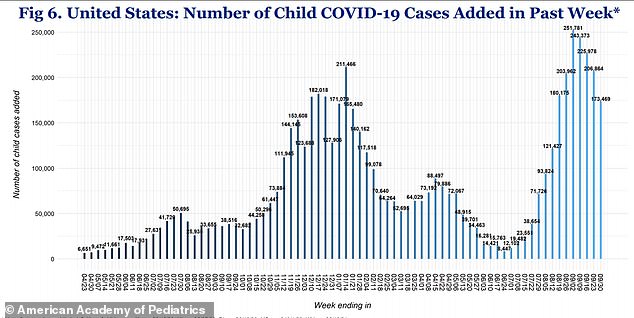 COVID-19 cases among children continue to decline, as the country’s youth sees a huge jump this summer.

a new report by American Academy of Pediatrics (AAP) found that 173,469 children tested positive for the virus in the week ending September 30, a 16 per cent drop from the previous week.

This is the lowest weekly total recorded since the week ended August 12, when 121,427 cases were reported.

However, most pediatric cases are not serious and virus-related deaths in children are rare, with pediatric deaths accounting for less than 0.1 percent of all COVID-19 deaths.

The declining trend in recent weeks has also been following the national case rate, as cases across the country have declined after a massive heat wave triggered by the delta variant.

The AAP found that 173,469 children tested positive for the virus during the week ending September 30, a 16% drop from the previous week.

More than 60,000 children who contracted the virus live in the South (green), with a larger share compared to less than 30,000 in the Northeast (blue).

The week of the report marks the first time that fewer than 200,000 child Covid cases have been reported in a week, compared to the week ending August 19.

Children also accounted for 26.7 per cent of the COVID-19 cases reported during that week.

In the US, just over 16 percent of the cases recorded since the pandemic began have been found in children.

A large proportion of these cases are in the South, which recorded more than 60,000 youth COVID cases that week, compared to less than 30,000 in the Northeast.

A total of 520 children have died from COVID-19 since the pandemic began, of which about 228 occurred after the rapid spread of the delta variant.

In six states – Arkansas, Maine, South Carolina, Tennessee, Vermont and West Virginia – there have been more than one youth case in every five cases reported in the state.

Arkansas, Florida and Utah have reported the lowest proportion of cases in children, just over 12 percent in all.

Children who have the virus are not likely to have severe symptoms, be hospitalized, or die from the virus.

A total of 22,429 children have been hospitalized due to the virus, with 615 reported during the week.

Currently, the Pfizer-BioNTech vaccine is only available to minors, and only to children 12 years of age or older.

American parents are currently split 50/50 on whether or not they will vaccinate their children.

The survey finds that parents of children are equally divided about whether their children will get the COVID-19 vaccine.

One SurveyMott Children’s Hospital National Poll on Children’s Health at Michigan Medicine in July, that 39 percent of parents said their children have already received a coronavirus shot.

one more vote Axios/Ipsos in September found that 44 percent of parents of children aged five to 11 said their children were likely to get vaccinated and 42 percent said it was unlikely that their children would be vaccinated. Will go