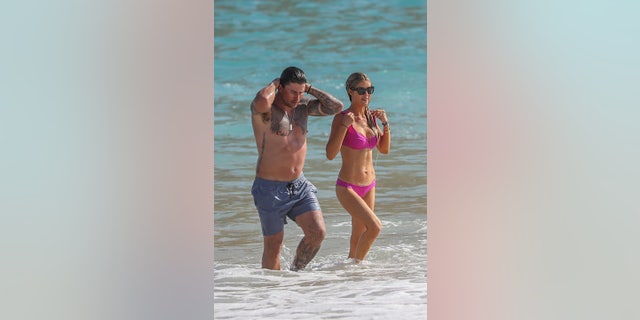 Christina Hack is spending time with her fiancee these days.

The 38-year-old reality star was recently spotted sporting her new rock on her finger while having a one-on-one shower with her boyfriend Joshua Hall in Cabo San Lucas, Mexico. She also wore a pink bikini, while Hall showed off her various tattoos wearing only blue swim trunks.

The “Flip or Flop” star has been dating Hall, who works at a real estate firm in Texas, for a few months, first fueling rumors of a romance in July.

She was previously married twice: once to her “Flip or Flop” co-star Tarek El Moussa from 2009-2018 and then to fellow reality star Ant Anstead, whom she married in 2018. They finalized their divorce earlier this year.

El Moussa, 40, and his own fiancé Heather Rae Young reacted to the news of Hack’s upcoming wedding.

“We just saw it, but congratulations!” El Moussa said when asked by people magazine Will he have heard the exciting news yet?

Young also offered the same sentiments as her would-be groom.

“Wow, awesome! We need nothing but happiness [Christina and Josh] And nothing but joy for the children,” she said. “We look forward to the next chapter in everyone’s life.”

Hack announced his big news on Instagram on Monday with three images of himself and Hall along with a series of emoji that clearly indicate that he said yes to his proposal.

In the photos the couple looks happy on the beach enjoying a candlelight dinner in Mexico as she highlights their new engagement.

When exactly Hall raised the question is unclear, and engagement rumors began circulating last month when she reportedly posted — then deleted — a photo of her wearing a sparkler on her social media account.

Last week, she was seen donning a larger-than-life diamond ring on her special finger while hanging on the balcony with her man.