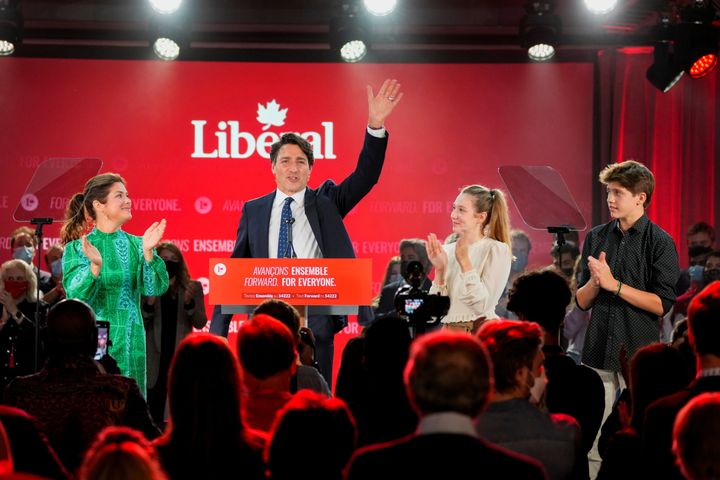 The opposition was relentless in accusing Trudeau of calling an unnecessary early vote two years before the deadline for his personal ambition.
– Advertisement –

The Liberals won the most seats of any party. Trudeau, 49, channeled the star power of his father, Liberal icon and late Prime Minister Pierre Trudeau, when he first won the election in 2015 and has led his party to the top spot in two elections since then.

Trudeau’s Liberals were leading or elected in 156 seats – one less than in 2019, and 14 fewer of the 170 needed for a majority in the House of Commons.

The Conservatives were leading or were elected in 121 seats, the same number they won in 2019. The left-wing New Democrats were leading or elected on 27 seats, a gain of three seats, while the Quebec-based bloc Québecois remained unchanged with 32 seats and the Greens. was down to two.

“You’re sending us back to work with a clear mandate to get Canada through this pandemic,” Trudeau said. “I hear you when you say you just want to go back to the things you love and not worry about this pandemic or the election.”

Trudeau entered the election, leading a stable minority government that was not in danger of being toppled.

The opposition was relentless in accusing Trudeau of calling an unnecessary early vote two years before the deadline for his personal ambition.

“Trudeau has lost his gamble on getting the majority, so I would say it’s a resounding victory for him,” said Daniel Beland, a professor of political science at McGill University in Montreal.

“Basically we are back at square one, because the new minority parliament will look a lot like the previous one. Trudeau and the liberals saved their skin and will remain in power, but many Canadians who did not want this late summer, the pandemic The polls are probably not happy about the whole situation,” he said.

Trudeau bet that Canadians did not want a Conservative government during a pandemic. Canada is now one of the most fully immunized countries in the world and Trudeau’s government has spent hundreds of billions of dollars to prop up the economy amid the lockdown. Trudeau argued that the approach of the Conservatives, which have been skeptical of lockdowns and vaccine mandates, would be dangerous and says Canadians need a government that follows science.

Conservative leader Erin O’Toole was not required to vaccinate her party’s candidates and would not say how many were unconvinced. O’Toole described vaccination as a personal health decision, but a growing number of vaccinated Canadians are upset by those who refuse to be vaccinated.

“The debate on vaccination and the anti-vaccination crowd, Trudeau helped the Liberals salvage a campaign that was not off to a good start for the party,” Beland said.

Trudeau supports making vaccines mandatory for Canadians to travel by air or rail, which conservatives oppose. And Trudeau has pointed out that Alberta, run by a conservative provincial government, is in trouble.

Alberta Premier Jason Kenney, O’Toole’s aide, said the province could be out of beds and staff for intensive care units within days. Kenny apologized for the dire situation and is now reluctantly offering a vaccine passport and implementing a mandatory work-from-home order two months after nearly all restrictions were lifted.

“Hubris prompted Trudeau to call an election. He and the Liberals won the election but lost the prize they wanted. It’s only a great night for the Liberals because two weeks ago it seemed like they would lose the government outright, which they couldn’t figure out before gaming the election,” said Nelson Wiseman, a professor of political science at the University of Toronto .

Wiseman said the Conservatives were hurt by the situation in Alberta. “The explosion of the pandemic in Alberta over the past 10 days undermined O’Toole’s praise of the Alberta Conservatives for how they handled the pandemic and strengthened Trudeau’s argument for compulsory vaccination,” he said.

A Conservative victory would have represented Trudeau’s rebuke against a politician whose name was recognizable, with a fraction of that. O’Toole, 47, is a military veteran, former lawyer and Member of Parliament for nine years.

“The Canadian people did not give Mr Trudeau the majority he wanted,” O’Toole said.

O’Toole said he was more determined than ever to continue, but his party could leave after ousting the previous leader who had failed to defeat Trudeau in 2019.

O’Toole advertised himself as a “true-blue Conservative” a year earlier. He became leader of the Conservative Party with a pledge to “take back Canada”, but immediately began working to push the party towards the political centre.

O’Toole’s strategy, which involved rejecting positions beloved by his party’s base on issues such as climate change, guns and balanced budgets, was designed to appeal to a wider cross section of voters in a country where was designed for, which is much more generous than that. southern neighbour.

The son of a longtime politician has faced criticism he will say and do anything to get elected.

Whether liberal Canadians believed O’Toole was the progressive conservative he claimed to be and whether he alienated the traditionalists became central questions of the campaign.

Vancouver software developer Regina Edshade, 28, said she was upset that the election was called early during a pandemic and with wildfires burning in British Columbia. But that didn’t stop him from casting the Liberal vote as the party represents his values.

“I don’t think there was an election right now, but it wasn’t going to change my vote,” she said.

Trudeau’s legacy includes embracing immigration at a time when the US and other countries closed their doors. He legalized cannabis nationwide and brought a carbon tax to fight climate change. And he upheld free trade agreements with the US and Mexico amid threats from former US President Donald Trump to scrap the deal.

Former US President Barack Obama and former Democratic nominee Hillary Clinton tweeted their support for Trudeau. O’Toole didn’t have Trump support. Conservative campaign co-chair Walid Soliman said there is no alignment between O’Toole and Trumpism. Soliman had previously said that keeping Trudeau in a minority government would be a victory for O’Toole.

Liberals ruled Canada for 69 years during the 20th century. Pierre Trudeau called for a “just society” and a country not seen before by a Canadian leader. He is responsible for Canada’s version of the Bill of Rights and is credited with opening the doors to immigration.

The largest city in Canada and one of the most multicultural cities in the world, Toronto was dominated by Trudeau’s liberals.