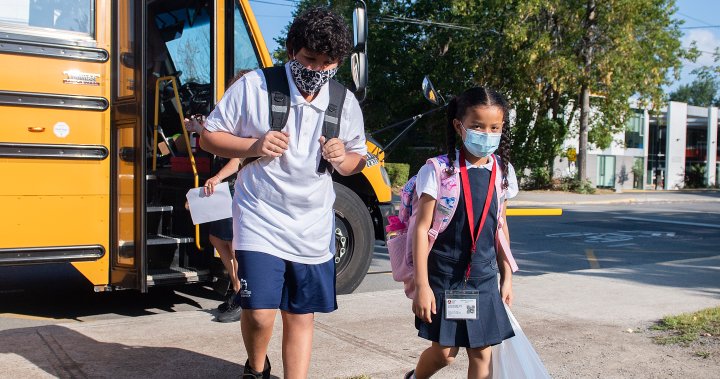 Severe cases of COVID-19 were very rare in Canadian children during the first wave of the pandemic, according to a new study by researchers, which warns the findings should not be taken as a reason for young people not to be vaccinated.

The study was published by the Canadian Medical Association Journal on Monday and looked at 264 reported cases of children hospitalized in Canada between March 25 and December 31, 2020, before the more infectious Delta variant emerged.

Of those cases, 43 percent were hospitalized for another reason, such as a fracture, and it was only after they were admitted that the positive test emerged.

Nearly 34,000 Canadians of all ages were hospitalized during the same time frame.

“If you look at the total numbers, there are only 150 children hospitalized with COVID during the first two waves in Canada,” said co-lead author Dr. Fatima Kakkar from Ste-Justin Hospital in Montreal.

“These are very small numbers, when you compare them with what has happened in adults.”

The study was conducted before the emergence of the more infectious Delta variant, which now accounts for the majority of COVID-19 infections in Canada.

This research also took place before COVID-19 vaccines were authorized for youth ages 12 and older. Of the cases studied, 77 involved children aged 13 to 17 years. Pfizer has said it wants to seek authorization soon for a vaccine for children between the ages of five and 11.

Researchers originally assumed that children may be at higher risk of serious illness, as it is commonly seen with respiratory infections in the pediatric population.

The most common symptoms were fever (70%) and cough (34%) among 150 children admitted directly to the coronavirus.

Half had a severe form of the disease, 21 percent were admitted to intensive care and 13 percent required respiratory or cardiac support.

Researchers said more than three percent of Canadian children – a high among all age groups in the country – have recently been shown to carry antibodies to COVID-19, indicating they have been exposed to the virus.

But the relatively small number of pediatric admissions suggests that children had less severe infections than adults, even though they were potentially infected more often, Kakkar said.

Overall, 39 percent of children and youth hospitalized for COVID-19 had at least one co-morbidity and those with severe illness were more likely to have an underlying health condition, including obesity, neurological or respiratory problems. There was a possibility.

“We often talk about children who have comorbidities and who are sick, (…)

“They were healthy children who were hospitalized for the disease. On the other hand, when we look at the severity, the most severe cases were in children who had co-morbidities such as obesity, a major neurodevelopmental disorder.

The death of children infected with COVID-19 was also very rare, confirming the findings of other studies.

But despite the encouraging findings, parents should not take a false sense of security from this and vaccinate their child, Kakkar said, adding that even children in good health ended up in the hospital.

“We don’t know which of these children are in good health, who will be the sickest, and we know that when we have a serious illness, we have consequences,” Kakkar said.

“A child placed in intensive care requires months of rehabilitation, and unfortunately we cannot predict which child will fall into this category.”

An unvaccinated child will also be more likely to continue spreading the virus within their family and friends.

She also noted that the delta variant is much more transmissible and is currently wreaking havoc among unvaccinated adults.

“I don’t want to discourage parents from getting their child vaccinated at all,” she said.

“We really have to look at the total well-being of the child: what will allow them to lead a normal life, do activities, play sports, see friends? It is vaccinations.”

Still, Kakkar said the benefits of going to school and meeting friends are essential for development.

“There is a lot of concern among parents about the risk of COVID in children,” Kakkar said.

“It’s important to reassure parents, it’s not the same disease as adults,[so]I hope this will allow kids to lead a little more normal life.”