Britain’s daily Covid cases hit a three-month high: Infections rise 7% in a week to 42,776 and hospital admissions go up by a tenth – but deaths dip by 5% to 136 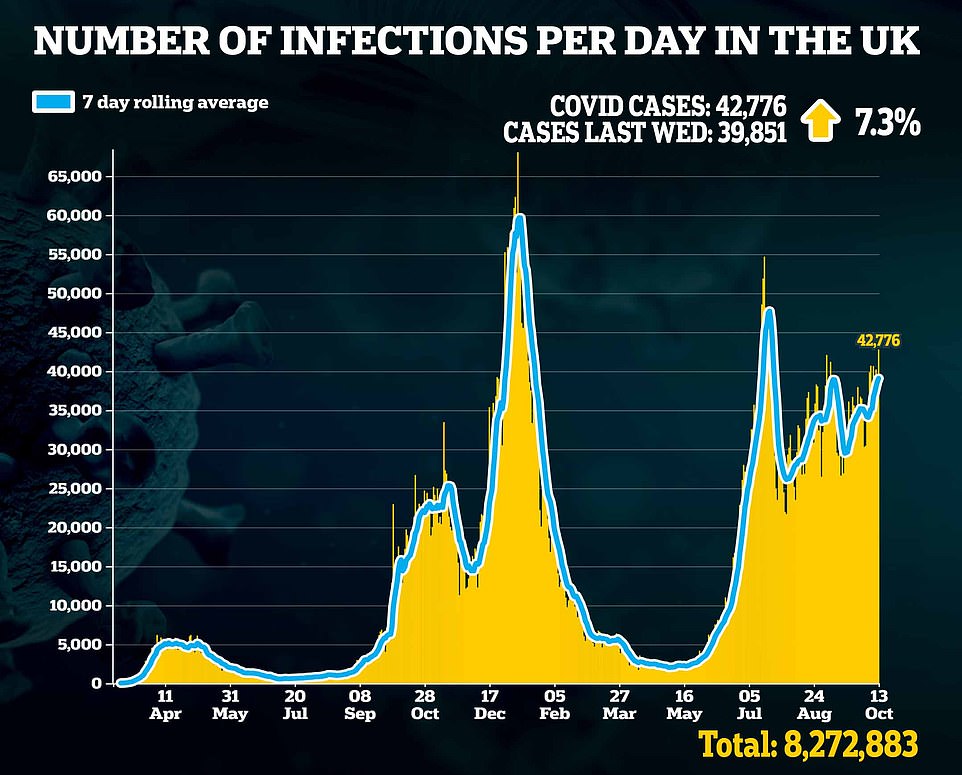 The health department’s daily update shows 42,776 positive tests were reported across the country in the last 24 hours, up seven per cent over the previous week.

The figure is the highest recorded since July 21, when 44,104 infections were posted and marks the eighth day in a row of rising cases.

Both measures are weeks behind case numbers, as it takes time for someone to become seriously unwell after catching the virus.

It comes amid growing fears that the fourth wave is just around the corner, with the infection now ticking across every age group.

The NHS app today allowed anyone to view their COVID vaccine passes for more than four hours, leaving holidaymakers unable to fly.

In yet more travel chaos, controversial software – which allows people to prove their vaccination status – was not displaying QR code passes due to ‘high traffic volumes’.

Users of the app began experiencing problems before 12 noon, and the health service said it was ‘investigating the issue’. The app started working again after 4.10 pm.

Meanwhile, desperate people traveling abroad claim they have been forced to miss their flights.

A man claimed he was ‘stuck’ in Greece because he was not allowed to travel back to England from Greece without a QR code. Another Brit, currently in Naples, said he was ‘not able to go to the ap*** because the app is broken’.

Others are worried about their upcoming holiday plans, as they are unable to fill out passenger locator forms for today’s and tomorrow’s flights.

The app’s problems are the latest in a series of problems facing travelers this summer, with E-gates crashing at the airport leading to queues of up to four hours upon arrival at Heathrow last week.

Fully vaccinated travelers returning from a country that is not on the red list are not required to take a pre-departure test and are exempt from quarantine, but they will have to undergo a day’s test.

In other developments today:

Infections south of the border are fueling a widespread increase in Britain, with cases in England reaching their highest level since 21 July, when 39,504 cases were reported.

The latest wave in the country peaked at around 50,000 in mid-July, before leveling off. But the infection rate seems to be increasing once again.

Meanwhile, the number of positive tests recorded in Scotland and Wales appears to be flat. Rates are rising in Northern Ireland.

And week-on-week infection rates were rising in every age group on October 8 – the latest date for which data are available.

Some 8.2 million positive tests have been recorded across the UK since the pandemic began.

But the actual infection numbers are several millions higher, because of limited testing capacity at the start of the crisis and everyone who catches the virus coming forward to be tested.

No10 Chief Scientific Officer Sir Patrick Vallance said earlier this week that cases in the UK are ‘basically flat’, indicating there is a ‘balance’ between immunity and the number of people exposed.

But he warned that the figures could go ‘in one direction or another’, so if everyone started making twice as many contacts, the infections would ‘increase quite rapidly’.

So it is a ‘balancing’ act with keeping people’s behavior and immunity high. Britain is not ‘out of the woods’, Sir Patrick said.

This figure equates to 85.6 percent of over-12s who have at least one jab and 78.7 percent are fully immunized.

But the Department of Health is yet to publish daily figures on the number of Britons coming forward for booster jabs.

Scotland: Last day saw 2,581 infections, as infections appear to be in the evening. Rates were down a month after a spike by pupils returning to classes in Scotland

Wales: 2,266 new infections recorded and infections appear to be relatively flat in the country

Northern Ireland: 1,471 more cases reported in last 24 hours. Transitions have been flat across the country

Britain must prepare for an early flu outbreak this winter as cases are already rising in other countries, a top expert has warned.

The flu season in the UK lasts from September to March, but the virus does not usually hit the NHS until January.

The latest surveillance shows cases have more than doubled in a fortnight, but are below levels seen from the same point in the 2019/2020 flu season. Health officials say the virus only…

‘The Bachelor’: Did New Host Jesse Palmer Confirm [SPOILER] as the Next Lead on Instagram?