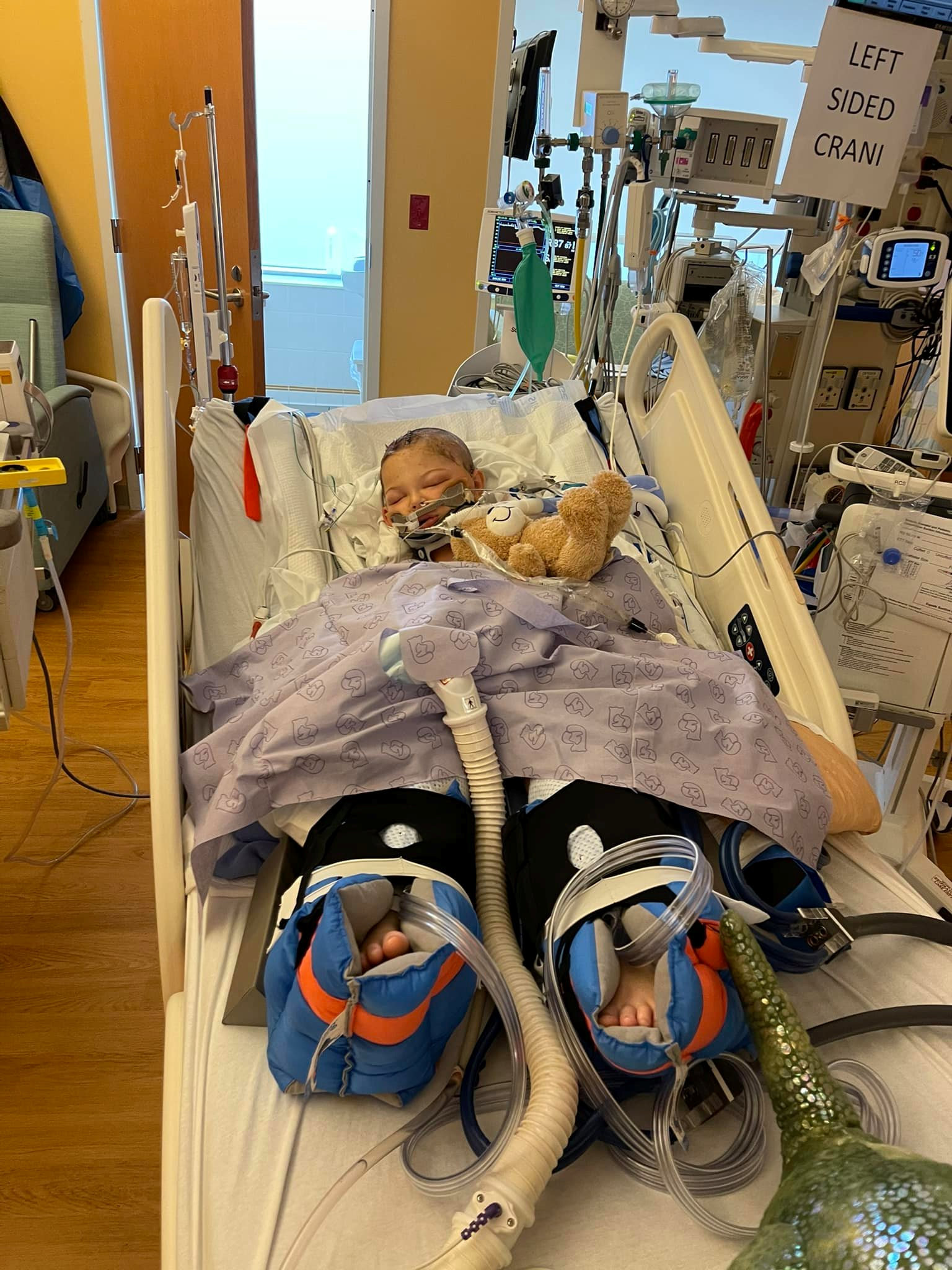 6-year-old Alex Hook is in a medically induced coma after sustaining severe brain damage from a 12-inch-long piece of metal.

Mom and Dad, Karin and Kirby Hooks are sick of their little boy who has now fainted since the September 10th incident.

Alex’s aunt, Michelle Koertzen, 55, set up a fundraiser to help with the medical costs and care for her 10-year-old brother, Nathan, who has special needs.

Karen, 49, said: “When I arrived at the hospital the emergency room team was preparing her for a scan.

“He was already unconscious and had several machines attached to him.

“I kept telling myself I must be having a nightmare because he can’t be my pretty boy.

“It feels like the hand of the father of time has stopped.

“Every day we thank the Lord that Alex is still with us and fighting for his life.”

The family said a landscaper was mowing a strip of land just behind Riverview Elementary in Silver Lake, Wisconsin, where children were playing.

At around 11.30, the mower ran over a useless piece of rebar and was projected through a chain link fence towards the school grounds and children.

The metal projectile, which is believed to be 12 inches long and half an inch wide, struck first-class Alex, who was leaning down at the time, on the back of his head.

He fainted and started having seizures.

The school contacted Mom Carin and the emergency services and reported the freak accident to her.

The mother of two said: “I was in complete shock but immediately calmed myself down and left for school.

“I had no idea of ​​the severity of his injury until I saw him on the ground with his head bleeding and jerking.

“I really don’t know what stopped me from fainting.”

The boy was taken to Children’s Hospital in Milwaukee while paramedics tried to stabilize him.

When they arrived, he was taken for a CT scan, where a fracture was found in his skull, and that a piece had broken off and stuck in his brain, causing bleeding.

He was taken in for emergency surgery to remove the largest piece, as well as some healthy skullcap to relieve some of the pressure.

The little boy remains in a medically induced coma because a bacterial infection causes a spike in his fever and puts dangerous pressure on his brain whenever he is released.

Karin, who works for a pharmaceutical company, said: “The doctors said the first 72 hours were critical, but here we are a week later and he is still in critical condition.

“Sitting by his bed, whenever possible, I read aloud the thousands of comments and prayers people are writing on the Facebook support page.

“I hope he can hear me so he knows how many people love him and is praying for a full recovery.

“Don’t let a day go by without hugging your kids and telling them you love them – life can change in the blink of an eye.”

Contribution to Alex’s medical costs can be made here.

“We are literally on an emotional rollercoaster.

“It’s heartbreaking to see this handsome guy unresponsive and attached to so many machines.

“The shower of love, prayers, positive thoughts and donations has been incredible and much appreciated.”