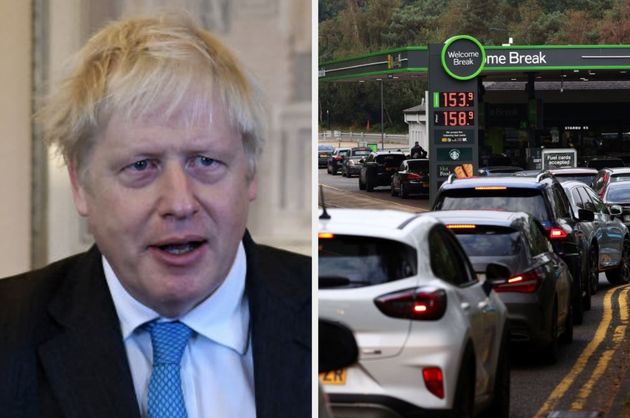 Government ministers declined to broadcast the interview on Tuesday.

Boris Johnson has continued to avoid public scrutiny over the petrol crisis and has now been accused of “hiding” by a former government aide.

In 2001 Mike Granat, head of the Civil Contingency Secretariat, said on BBC Radio 4’s Today program on Tuesday that the government needed to be more transparent with the public.

He claimed that the prime minister was choosing to “conceal” and make “excuses” for not addressing the fuel crisis that has gripped the country for four days.

His words followed confirmation from today’s program that ministers had chosen not to appear on the radio show while invited to discuss the government’s controversial U-turn on involving the military.

TODAY host Nick Robinson said: “Now, we would like to speak to a minister about all of this at this time, but Downing Street says they are not available.

“They are doing this because of the long-standing tradition of leaving the airwaves free for their opponents during party conventions.”

PR expert Grenat again addressed the Prime Minister absence from the media, And mentioned his time with the Cabinet Office two decades ago when he was working under Tony Blair and another fueled crisis.

He said: “What happened in late 2000 is that the Prime Minister got hold of this stuff, stood shoulder to shoulder with the fuel operators and held a press conference and explained to the people [what was going on]”

Granat claimed that people began to behave normally only when they realized that it would take three weeks for the system to rebalance.

Robinson then asked: “Are you suggesting there’s a kind of COVID-style news conference, Boris Johnson has to say to the country, ‘Don’t fill up your tank, get petrol if you need it, but when Will there be chaos in the coming weeks until you go back to normal behavior?’”

Granat said: “Yeah, it’s called leadership. We need something. Someone needs to stand up and say this to people instead of hiding.

“I think this excuse about party conventions is just that – an excuse.”

Robinson replied: “Well, of course, they [ministers] You’re welcome to come to the event, he just needs to pick up the phone, we’ll be happy to interview him this week.”

Tuesday was a particularly important day, as Downing Street has changed its message to engage the military with supply chains.

On Monday, the government said it had no plans to engage troops in the current crisis, which stems from a shortage of HGV drivers.

As of Monday evening, Downing Street confirmed that soldiers were being trained to operate petrol tankers as the military was put on stand-by, although they have not yet been deployed.

According to reports, 75 military tankers are already ready to go, while 75 more may move soon.

The explanation behind this U-turn has not yet been addressed by any minister.

Granat, a genuine old supporter (I remember when he was then head of the Government Information Service), recalls how Blair literally stood shoulder to shoulder with petrol owners asking the public to just fill up the tank, They really need it.
Want a Kovid style press conference.

- Advertisement - A distraught mother of two sisters stabbed to death in a park today sentenced their “confused”...