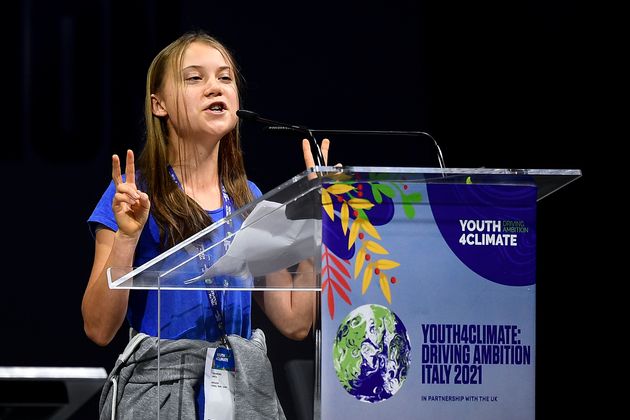 The teenage environmentalist captured the buzz phrase used by the UK prime minister in April, when he mentioned “No Planet Bee” and “Net Zero” and used derogatory terms like “bunny hugging”. He made fun of Johnson by adding “blah, blah, blah.”

Speaking at the Youth4 Climate Summit in Milan, Italy, the Swedish activist said the leaders’ words led to “no action”.

When the 18-year-old targeted the PM, the audience applauded.

During his speech on Tuesday, he said: “This is not about some expensive, politically correct, green act of embracing the bunny.

“This is all we hear from our so called leaders.

“Words that sound great, but no action has been taken yet.”

Last week, Johnson used a keynote speech at the United Nations General Assembly to challenge the message of the Muppets character kermit Frog, who sang: “It’s not easy being green.”

“That was wrong,” he said of Jim Henson’s creation. “It’s easy being green.”

Thunberg’s speech comes ahead of the Cop26 international climate conference in Glasgow, at which world leaders will pursue a goal of limiting further rise in temperature to 1.5C.

The summit will include calls to accelerate the phasing out of coal, reduce deforestation, accelerate the switch to electric vehicles and encourage investment in renewable energy.

UK ministers are keen to include face-to-face meetings and speeches for the Cop26 conference, as the event was delayed by a year due to the coronavirus pandemic.

Speaking about the words of world leaders on climate change, Thunberg said: “Our hopes and dreams are drowned in their hollow words and promises.

“Of course, we need constructive dialogue – but they have 30 years of blah, blah, blah, and where has it taken us.

“All this is happening at a time when the media is reporting what leaders say they are going to do, rather than what they are actually doing.

“Don’t get me wrong, we can still do this. Change is not only possible but also urgently necessary.”