As NHS waiting lists soar, many are going private… but beware delays, rising premiums and costly small print Why medical cover should carry a health warning 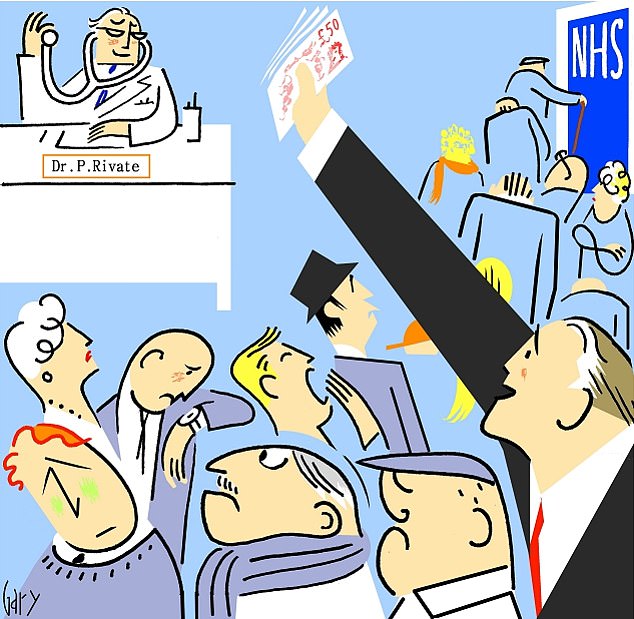 The ad depicts a nurse with teary eyes walking through a clean hospital gleaming in disposable face masks.

The voice-over claims, ‘We’re here when it matters.

Shot during the lockdown, this is the first TV commercial for private hospital operator Spire, which recently posted a 40 percent jump in revenue.

Jumping the queue: With 5.6 million patients reportedly awaiting treatment on the NHS, private healthcare providers see a boom in business

Like many private healthcare providers, Spire is on a marketing mission, investing in primetime television slots and expanding its branding into social media newsfeeds. Its message is simple: we can help you faster than the NHS can.

Spire isn’t the only provider or insurer promoting this line. Just a Google search of ‘private medical insurance’ brings up dozens of results promising ‘jumping the NHS queue’ or ‘avoiding the NHS waiting list’.

With our national healthcare system reportedly waiting to treat 5.6 million patients, it is no surprise that private health providers have found an opportunity.

But experts warn that an influx of new business could delay the independent sector and raise premiums for existing customers.

And it is important that you go through the small print of the policy carefully, as it may not cover all your health related needs.

Private hospitals are now offering more hip and knee replacements than the NHS for the first time since operations became widespread in the 1960s and 1970s.

Spire alone reported a £4.7 million pre-tax profit in the six months to June this year, bringing their revenue to £558 million. This was followed by a loss of £231 million to the provider in 2020.

David Hare, chief executive of the Independent Healthcare Providers Network, says: ‘With NHS waiting lists at record levels, more and more patients understand that they are choosing to pay for their care privately.’

There are two ways to access private health care. The first is to get health insurance, which should cover private treatment free of cost when needed.

The second is to pay for care with your own savings.

And it is the latter that is largely driving demand, as patients increasingly desperate to pay five-figure sums out of their own pocket for medical assistance.

For example, a typical knee replacement costs between £12,000 and £15,000. Nuffield Health says the demand for operations from paying patients is currently higher than levels in the same period before the pandemic.

In demand: Unprecedented interest in private healthcare is contributing to waiting lists and delays in the sector, claim experts

And Spire reported an 81 percent increase in funding from patients funding their own treatments in the second quarter of 2021 compared to the same period in 2019.

Self-employed HR coach Lisa Brennan, 45, was one of the first to turn to private care when gallstones left her in crippling pain and unable to eat anything other than mashed potatoes.

Lisa was told she would have to wait six to nine months for surgery on the NHS. Instead he used his savings to pay for £7,800 to have the surgery done privately.

She says: ‘If I had to, I’d pay for it again. I was in a lot of pain and it was really affecting my workload as I was unreliable and unable to sustain my income.

A brief look at fundraising sites like GoFundMe reveals that many patients are begging for help with private care. Like Lisa, they report being in too much pain to wait on the NHS.

And many others are now looking ahead as younger patients move to longer-term private medical cover.

According to GoCompare Health Insurance, the average age of their policyholders has come down from 40 to 33 in the last one year. GoCompare’s Richard Jones says: ‘We are seeing a new generation of consumers entering the market who want to include private health insurance in their monthly expenses.’

But this unprecedented interest in private healthcare is contributing to waiting lists and delays in the sector, experts claim.

The demand comes at a time when even private hospitals and consultants are dealing with their own repercussions from the pandemic.

During the peak of the crisis, providers had to treat NHS patients, while non-essential treatment was canceled due to government restrictions.

According to consumer groups, more than four out of ten health insurance customers have seen scheduled services postponed, canceled or interrupted due to the pandemic?

That means even private providers are catching up. And insurance companies are having to issue discounts to patients whose cover was effectively zero for months.

Bupa says it has refunded 99% of its eligible customers an amount equal to about one month’s premium and is working to reimburse the rest.

Meanwhile, both Aviva and AXA say they will issue discounts to customers if they find the value of their health insurance claims in 2020 and 2021 to be lower than in previous years.

Private hospitals are now offering more hip and knee replacements than the NHS for the first time since operations became widespread in the 1960s and 1970s.

But there is also this fear…