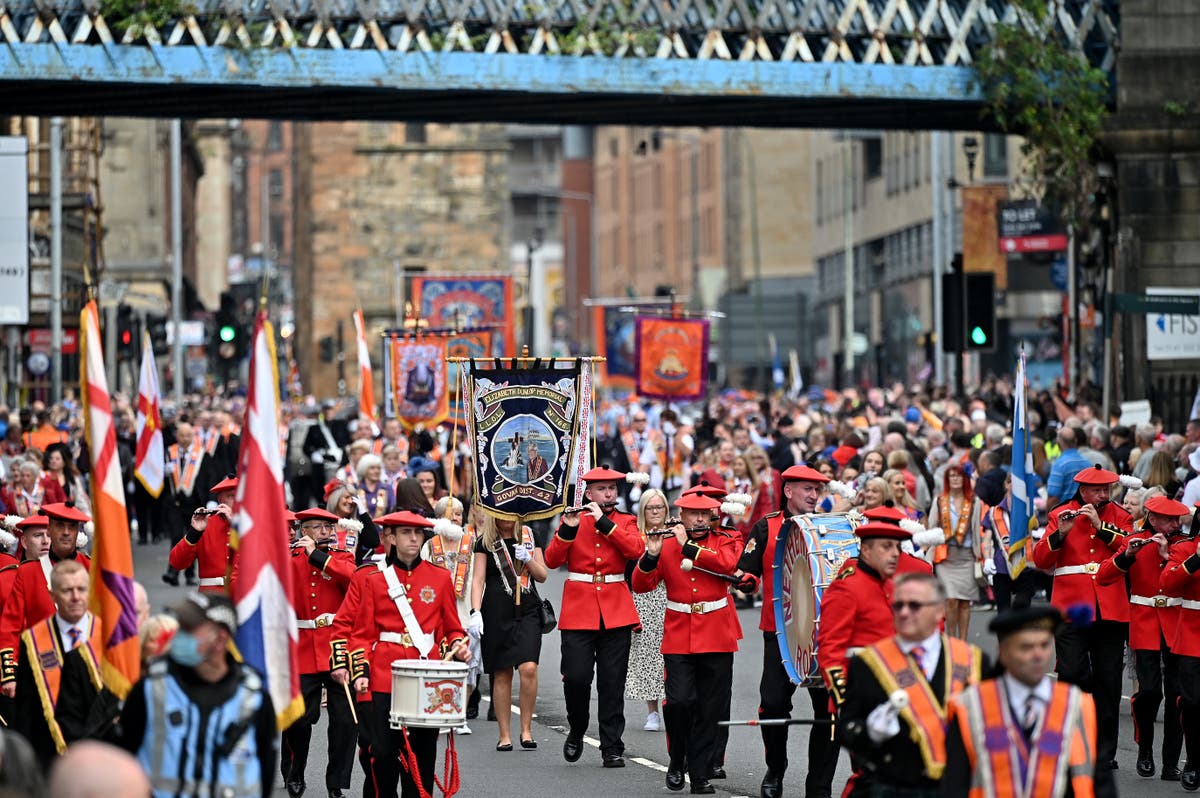 Several arrests have been made by police after “racist and sectarian singing” during the Orange Order procession closed down the streets in Glasgow.

Thousands marched in the streets of the city center and in front of Catholic churches, protesting.

Members of Call It Out, a campaign group that opposes anti-Irish and anti-Catholic bigotry, vigil outside churches along the routes.

800 police officers were deployed to manage the event.

Chief Superintendent Mark Sutherland, Divisional Commander of Greater Glasgow, said: “We know that on several occasions today there have been outbreaks of racist and sectarian singing by some who supported the Orange Order procession, this is completely unacceptable. And we Totally condemn this behaviour.”

He said the police were seeking action against those “with intent to harm and divide our communities” and that several people had been arrested in connection with various crimes.

“Once again, we see that many people intend to commit crimes and spread hatred by singing unacceptable communal and casteist songs. I want to again strongly condemn this behavior,” said Ch Supt Sutherland.

“It is clear that sectarianism remains a serious, ongoing problem in Scotland and that while the police have an important role to play in tackling this type of behaviour, it is a collective problem and needs to be addressed in a collective, collaborative manner.”

The Church of Scotland condemned “anti-Catholic bigotry and sectarianism”.

“We have a very close working relationship with the Roman Catholic Church,” it wrote on Twitter.

“Over the years we have worked together to tackle communalism and support each other.”

The streets of the city center were crowded during the march along streets such as George Street and West George Street, and there was a large police presence in Glasgow Green where members of the parade gathered in the afternoon.

Glasgow City Council said 32 streets had been closed for processions as of mid-afternoon.

In 2018, a Catholic priest was attacked as an Orange Walk march past outside St. Alphonse Church in the city.

Call It Out said its supporters had gathered outside Blessed John Dunn Scotus at St Benedict and Gorbals at Easterhouse as the march went on to “say no to hate on the streets of Glasgow”.

“Our resolve is stronger than ever and there is an increasing number of people willing to stand with us. Not an anti-Catholic march in front of Catholic churches, not an institutionalized anti-Catholicism,” it tweeted.

Granthshala editorial: Counting the cost of an unnecessary election