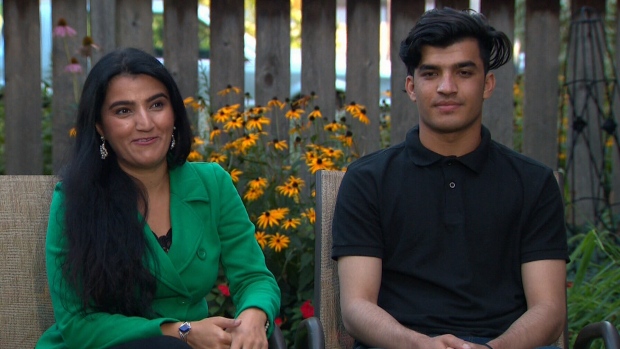 MONTREAL/TORONTO – An Afghan interpreter is reunited with his family in Canada after they were able to board one of the last evacuation flights from Kabul.

Mariam Sahar told Granthshala National News that she feared for the past decade that she would never see her brothers and mother again.

However, the former interpreter’s family was among those who managed to escape to Canada in August. The family recently held a backyard party to celebrate the reunion.

Sahar said of his brothers in an interview with Granthshala News, “I was a little scared how the reunion would go, but they turned out to be really nice guys.”

Sahar worked as an interpreter in Kandahar after being hired by Charlotte Greenall, a now retired Canadian soldier.

Sahar was just 15 when she signed on to help with missions in Afghanistan and was the only local female interpreter for the Canadian Armed Forces. He ignored threats from the Taliban to help Canada in the hope of bringing peace to his homeland.

She fled to Canada for a new life in 2011, when one of her brothers, Omar Sahar, was kidnapped by the Taliban, drugged and tortured to drive her to the base.

“He was wearing scarves. He was 12 when the Taliban took him away,” Sahar said.

Months before the Taliban came to power in August, Sahar and Greenall urged Ottawa to help rescue Sahar’s family and others who aided the war effort.

After several sleepless nights, Sahar’s two brothers and mother were able to board the final rescue flight from Kabul before the airport closed.

Sahar previously told Granthshala News that a bureaucratic hurdle at the airport nearly derailed his escape, threatening to leave his 12-year-old brother Ibrahim Sahar behind with a visa issue. In the end, the family was able to board together.

Escaping the Taliban proved to be a difficult journey, and their family reunion was emotional.

Omar said of his sister, “I love her, I love her as she is. I loved her as much as ten years ago, and I love her as I am and am really proud of her.” Am.”

Despite the happy reunion, the family knows that there are still obstacles ahead for them.

“To be a refugee is like being a child again, you have to learn everything all over again,” Sahar said.

Now in Canada, the family hopes that Omar can complete his studies to become a software engineer and Ibrahim can attend university in the future.

Despite any challenges the family may face, Greenall, whom Sahr now affectionately calls “mother”, says she is here to help them.

“We’ll treat them as our children, and we’ll bring them into our lives. They might as well be Greenalls with Sahar, because we’ll just be one happy family, that’s what.”