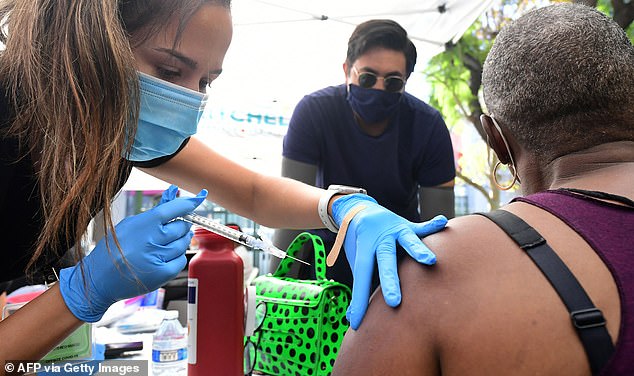 A new study shows that more than two-thirds of Americans who were hesitant to receive a COVID-19 vaccine had received at least one dose or were ready to be vaccinated by spring 2021.

Researchers at Emory University in Atlanta conducted a survey of more than 4,600 respondents who answered questions about vaccines in 2020 and again in March and April of this year.

They found that a third of adults who said they were hesitant to get the shot had received at least one initial dose.

In addition, nearly 40 percent of those who previously reported they were ‘unlikely’ to be vaccinated now said they were ready to get their shots.

The team says the finding shows that, although vaccine hesitation decreased from last year to this year, there are still ‘disparities’ to address about who has access to the shots.

Researchers polled 4,600 adults about the likelihood of getting the COVID-19 vaccine in 2020, and again in March and April this year. Image: Registered nurse Amber Boyd administers a dose of Pfizer vaccine at a clinic for the homeless on September 22 in Los Angeles

Last year, when researchers were still developing and testing COVID-19 vaccines, a debate was igniting about getting the shots.

Questions were swirling about whether manufacturers were cutting a corner and whether then-President Donald Trump was going to push for a vaccine to be approved ahead of the 2020 general election.

a pew research center poll In September 2020, a 50/50 split was found on whether US adults would be immunized.

Some were concerned about side effects while others said they wanted to ‘wait and see’ if the shots were effective.

Health experts have stressed that overcoming vaccine hesitation is critical to getting the remaining 71 million eligible Americans, who remain unaffiliated, to roll up their sleeves.

However, new research suggests that early vaccine hesitation may not necessarily be tied to eventually getting JABS.

for the study published on Friday jama network openThe team recruited 4,654 participants who were initially interviewed between August 9, 2020 and December 8, 2020.

People were asked whether they were ‘likely’ or ‘very likely’ to receive a COVID-19 vaccine, classified as willing, or ‘very unlikely,’ ‘not likely,’ or Classified as ‘uncertain’, hesitating.

Among the age groups, 66 percent of those aged 18 to 54 were willing to be vaccinated, while 34 percent were hesitant.

A large proportion of people 55 and older were willing to get their COVID-19 shots, at 74 percent compared to 26 percent who were hesitant.

During the first wave, Hispanics were the race/ethnic group ready to be vaccinated at 71 percent, compared with 69 percent for whites and 57 percent for blacks.

Meanwhile, African-Americans were most likely to hesitate at 43 percent, compared to 31 percent for whites and 29 percent for Hispanics.

In the past, racist health policies have victimized America’s communities of color, making them hesitant to get vaccinated.

One of the most famous examples is the Tuskegee Experiment from 1932 to 1971, in which black men were used to track the progress of syphilis.

However, the study was run without his consent and he never received treatment to cure the sexually transmitted infection.

There were also the eugenics movement that led to the sterilization of black, Latina and Native American women across the country in the 20th century.

The second wave of the survey was conducted from March 2, 2021 to April 21, 2021, asking not only about their chances of getting a COVID-19 vaccine, but also whether they had been vaccinated or No.

The researchers found that 54 percent of the willing group had received at least one dose and 39 percent were still likely to be vaccinated when shots became available to them.

But surprisingly, of the group that was hesitant in 2020, 32 percent had received at least one dose by the end of April 2021.

An additional 37 percent said they are likely to be vaccinated now when vaccines are available.

At follow-up, 71 percent of those 55 and older were vaccinated, compared to 22 percent or willing and seven percent hesitant.

Among young adults aged 54 and younger, 31 percent had received at least one initial shot, 50 percent were willing and 19 percent were still hesitant.

It’s worth noting that, at the time, vaccines were not yet available everywhere for the youngest American adults under the age of 30.