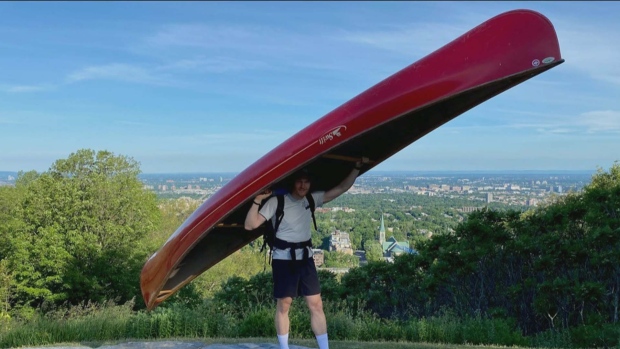 TORONTO – A Montreal man with multiple sclerosis has walked 700 kilometers to raise funds for MS research.

At dawn on Thursday, Felix Jasmine and his team prepare to begin The Grand Portage, an 18-day canoe-camping expedition from Toronto to Montreal via Ottawa.

“I thought porting a canoe was a Canadian way of fighting a disease, and it hasn’t been done yet, it’s not like I know,” Jasmine told Granthshala’s Your Morning on Monday.

Funds raised from the trip will benefit MS research projects led by Dr. Jacques Antell of McGill University’s Montreal Neurological Institute-Hospital and Dr. Alexandre Pratt of the University of Montreal’s Health Center. Antell and Pratt plan to use the funds to build partnerships with Toronto institutions such as the Barlow MS Center at Toronto-area St. Michael’s Hospital.

Last year, Le Grand Portage was held virtually due to COVID-19 restrictions, but Jasmine was still able to raise $370,000.

“It has really gotten into people’s calendars and it has picked up in momentum and I look forward to doing the same thing this year,” he added.

An avid Hubs fan and Canoer, the young father of three first began feeling symptoms in 2015, but doctors couldn’t figure out what it was at the time.

“I’m not feeling well and I’ve seen a bunch of doctors in Montreal doing tests and everything seems normal,” he said.

Four years later, Jasmine began to lose vision in her right eye and developed bladder issues and difficulty with balance. He finally got his diagnosis in October 2019.

“Amazingly, I was relieved the first time. The relief is that I hadn’t gone mad for four years,” he said. “It was quickly replaced by fear, anger, sadness.”

Almost immediately after his diagnosis, Le Grand Portage was born.

Jasmine said, “My wife and I met, and we decided to fight back on it. And our way of fighting it is through research and research that requires a lot more money than we have.”

This year, organizers hope to raise $300,000 and are inviting all Canadians from coast to coast to participate in Le Grand Portage on October 17th.

Jasmine said, “All spectators, no matter where you are, can do your own version of Le Grand Portage, whether it’s walking, running, writing or dancing.”

Jasmine also offered some advice to Your Morning host Lindsay Dilues, who will also take a canoe to one of the legs of Le Grand Portage.

“It’s not really about strength. My wife can really out-portage like me because it’s all in your head. So, I believe you’re going to do great,” he said.